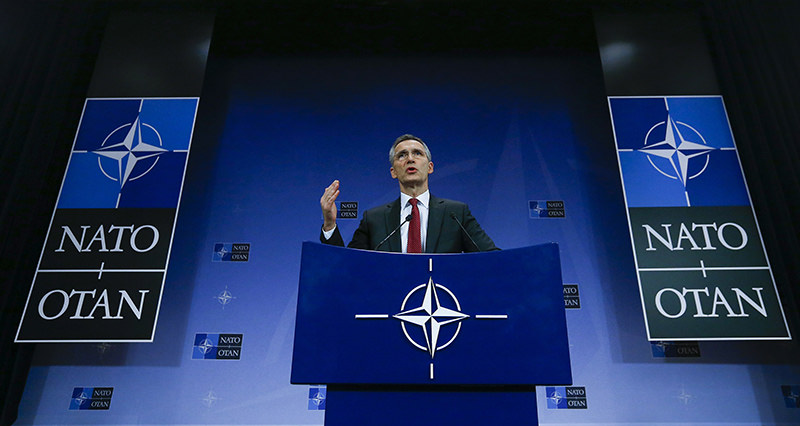 NATO Secretary-General Jens Stoltenberg holds a news conference ahead of a NATO defense ministers meeting, which will be held on February 10-11 (Reuters Photo)
by Feb 09, 2016 12:00 am
NATO will take any request to help with the refugee crisis "very seriously", chief Jens Stoltenberg said Tuesday after Germany and Turkey said they would seek NATO's help in combatting human smugglers.

Defence ministers from the 28-nation alliance will discuss the issue at a meeting in Brussels this week following the request from Berlin and Ankara for help in policing Turkey's shores, he added.

"I think we will take very seriously the request from Turkey and other allies to look into what NATO can do to help them cope and deal with the crisis and all the challenges they face, not least in Turkey, " Stoltenberg told a news conference.

Former Norwegian premier Stoltenberg said he had spoken with the Turkish and German defence ministers on Tuesday to discuss the issue, adding that the migration crisis was "of great concern for all of us".

"I expect the ministers to discuss the request from Turkey and then agree on how we can follow up," he added.

German Chancellor Angela Merkel said during a visit to Ankara on Monday that Turkey and Germany would ask NATO to help police the Turkish coast to prevent smugglers from packing migrants into overloaded boats for the perilous crossing to Greece.

Turkey is the main gateway for migrants and refugees crossing into Europe, which received over a million people last year, more than half of them fleeing the war in Syria.
Last Update: Feb 09, 2016 3:22 pm
RELATED TOPICS