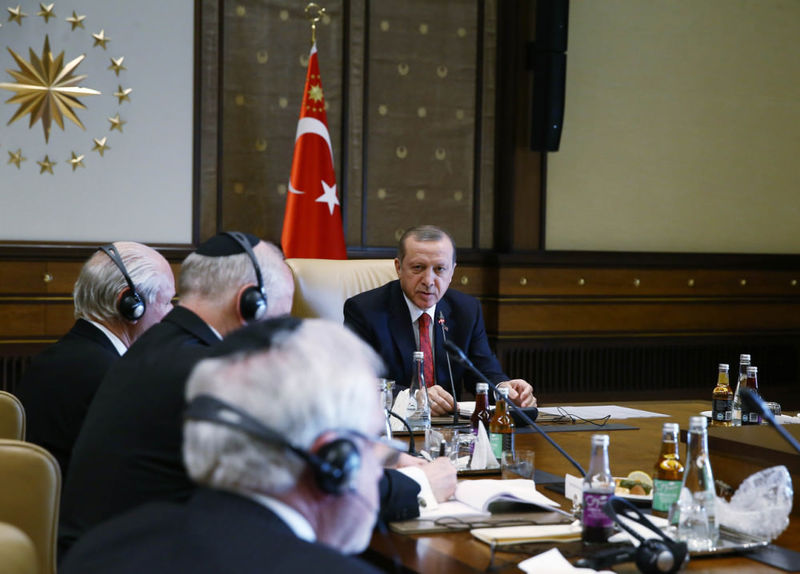 The ADL gave a medal of valor to Erdoğan while he was prime minister in 2004 for working toward a peaceful solution in the Middle East and his commitment to protect Turkey's Jewish citizens, but with deteriorating relations between Turkey and Israel the organizations asked for the medal back. In 2014, the ADL issued an open letter to Erdoğan, praising his leadership in affirming Turkey's commitment to providing an inclusive society for its Jewish citizens. With improving relations, the president of the ADL along with 52 other organizations' presidents met with Erdoğan and Davutoğlu separately.

According to presidential sources, in the meeting the CoP and Erdoğan discussed the current stage of the normalization talks between Turkey and Israel. Erdoğan said that from his perspective, anti-Semitism and Islamophobia are the same and he is against both, adding that his criticism of Israeli politicians should not be misunderstood as being against all Israeli citizens. Giving information about the current stage of the normalization talks, Erdoğan reportedly said talks are continuing on the issue of easing the Gaza blockade and that the issue has to be tackled in a comprehensive and humanitarian manner that considers the water and electricity needs of the people in Gaza. Erdoğan also said that Turkey and Israel can make energy agreements after the normalization of relations. Members of the CoP reportedly expressed their support for the normalization of Israeli-Turkish relations.

Sources also say that they discussed regional developments and the recent developments in normalization negotiations to improve relations. Israel had agreed to pay Turkey $20 million in compensation, which will be transferred to a special fund that will in turn provide grants to the families of the Turkish citizens who were killed or injured in the Israel' commando raid of the Mavi Marmara in accordance with the recent agreement between the two countries. The CoP, which was established in 1956, addressed matters concerning U.S. Jewish communities and aims to establish consultation and coordination with Jewish organizations.

Bilateral relations dramatically soured when a second flotilla organized by the international Free Gaza Movement and Turkish nongovernmental organization İHH Humanitarian Relief Foundation, known as the Gaza Freedom Flotilla, was raided by Israeli forces in international waters in 2010. Efforts to re-establish relations have recently been initiated, but Ankara insists that all of its conditions must be met, including ending the Gaza blockade and compensation for the slain Turkish activists in the Mavi Marmara raid.

Presidential spokesman İbrahim Kalın recently said at a press conference in Ankara that Israel must meet Ankara's three conditions in order to normalize relations and that Ankara will not take a step back regarding the Palestinian cause in talks with Israel. "Turkey will continue to play its role until a two-state solution is reached and the Palestinian people have their own state. Permanent peace cannot be achieved in the region without resolving the Palestinian issue," Kalın said.
Last Update: Feb 10, 2016 11:40 pm
RELATED TOPICS