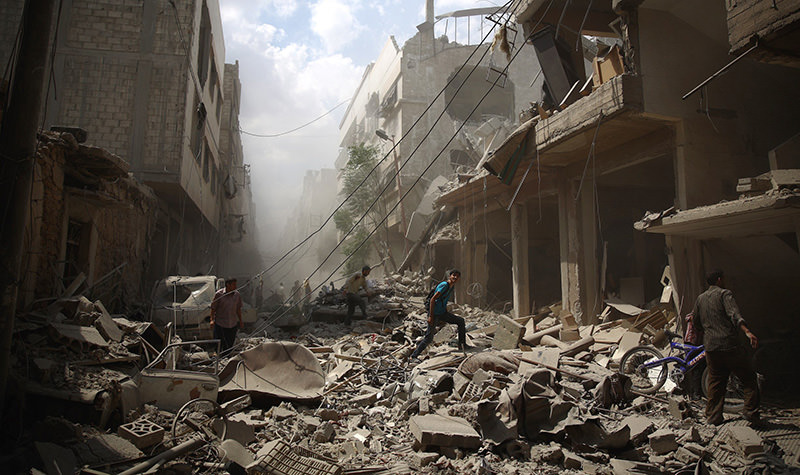 Syrians walk amid the rubble of destroyed buildings following reported air strikes by regime forces in the rebel-held area of Douma (AFP Photo)
by Daily Sabah Feb 11, 2016 12:00 am
A report from the Syrian Centre for Policy Research (SCPR) says that nearly five years of conflict has had a "catastrophic impact" on Syria's economy, institutions and infrastructure, with efforts still lacking for finding a solution to end the violence.

The report says that the number of fatalities due to war rose to 470,000, almost double the figure of 250,000 used by the U.N., which has stopped collecting updated data for more than a year.

Of the 470,000 dead, 70,000 died from inadequate health services, starvation, lack of clean water, sanitation or proper housing, and the remaining 400,000 died due to violence in the country.

The report says that 11.5 percent of the country's population has been killed or injured, including at least 1.9 million wounded since the outbreak of the war in March 2011. There has also been a deep decrease in life expectancy over the five years, from 70 in 2010 to 55.4 in 2015.

A 21 percent shrinking of the population helps in part due to the waves of refugees reaching Turkey, which has taken in 2.3 million people, and Europe. The report also says that 45 percent of the population has been displaced, 6.36 million internally and more than 4 million abroad.

The humanitarian cost of the war has deepened after the Russia- and Iran-backed Syrian regime offensives in Aleppo province, which was the heart of the country's economy. It is still facing the danger of being cut off from the outside world and opposition representatives have been making calls for urgent action to relieve the suffering of hundreds of thousands of civilians.

Speaking to the U.K. daily The Guardian, Rabie Nasser, the report's author, said: "We use very rigorous research methods and we are sure of this figure," adding: "Indirect deaths will be greater in the future, though most NGOs and the U.N. ignore them."

The report says that the global awareness has only risen during times when the impacts of the war have been felt close to home: "Despite the fact that Syrians have been suffering for … five years, global attention to human rights and dignity for them only intensified when the crisis had a direct impact on the societies of developed countries."

Considering the economic aspect of the ruined country, the study pays attention to the corrupted institutions that do business through blackmail, theft and smuggling that support the continuation of armed conflict, becoming "a black hole" absorbing "domestic and external resources." While overall economic losses of the war are estimated to be $255 billion, people were affected by a 53 percent rise in consumer prices last year and poverty increased 85 percent in 2015 alone, the report says.

Despite these figures of the impacts of the war whether a political solution is in sight remains a question. The most recent U.N.-brokered peace talks in Geneva are scheduled to resume in two weeks. Many global and regional actors gathered in Munich on Thursday.
Last Update: Feb 11, 2016 5:42 pm
RELATED TOPICS