Despite restrained remarks from its leader, PYD expansion continues in northern Syria 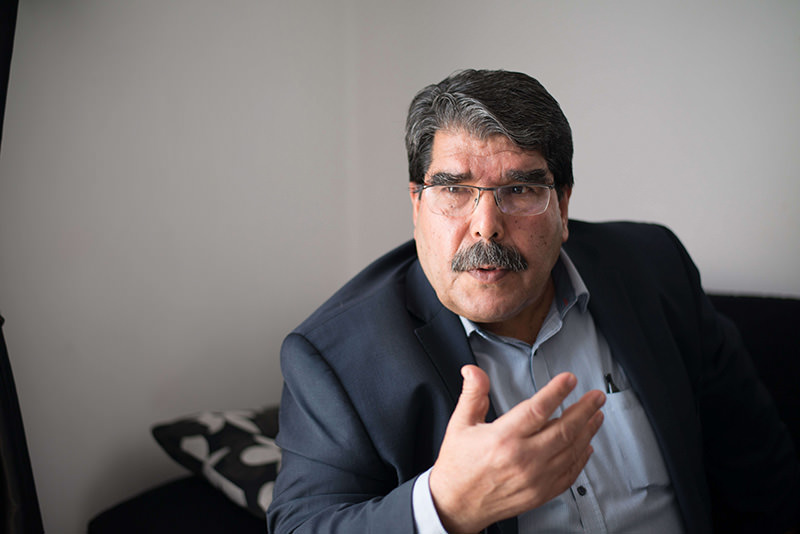 by Daily Sabah Feb 11, 2016 12:00 am
The Syrian PKK affiliate Democratic Union Party's (PYD) statements and actions continue to contradict each other as the group seeks to advance toward moderate opposition-held areas in northern Syria.

PYD Co-Chair Salih Muslim recently said that the bulk of the PYD's armed People's Protection Units (YPG) will not cross west of Euphrates River, which Ankara has said is its red line, unless the operation is orchestrated in coordination with the U.S.-led anti-DAESH coalition.

Speaking to Voice of America on Tuesday, he said that his biggest worry is that Turkish forces may be drawn into the fight and that moderate opposition groups that Turkey supports might create a problem for them in the future.

Prime Minister Ahmet Davutoğlu has implied that Ankara will hit PYD targets if YPG forces cross west of the Euphrates. He said: "In the event of the emergence of a threat directed toward Turkey, we will take the same measures in Syria as we did in Iraq."

Speaking at a joint press statement with Dutch Prime Minister Mark Rutte in Lahey on Wednesday, Davutoğlu said the PYD is in cooperation with Russia and attacks civilians, committing war crimes.

Although Ankara had reiterated its position against the PYD, Washington's recent statements that the U.S. does not consider the PYD or the YPG to be terrorist organizations, has soured relations.

Regarding this development, Davutoğlu said discriminating between terrorist organizations is as dangerous as terror itself and that such statements show ignorance to the reality in the Middle East, adding that Washington's clarification of its stance on the PYD is Turkey's right.

U.S. Ambassador to Ankara John Bass was summoned to the Foreign Ministry on Tuesday over State Department spokesman John Kirby's remarks that the U.S. does "not consider the PYD and the YPG as terrorists." His statement was in response to President Recep Tayyip Erdoğan's ultimatum to Washington to choose either Turkey or the PYD as its ally.

Even though Ankara repeatedly warned the U.S. and Europe that there cannot be any good or bad terrorists, pointing to the YPG, the U.S. disregarded Erdoğan's latest call and continues to designate the YPG as its "partner" and Washington continues to reiterate its position on the YPG.

"Nothing has changed about our policy on that," Kirby told reporters at a press briefing on Tuesday, but added that the U.S. considers the PKK a foreign terrorist organization.

"Everybody who's contributing in the fight against DAESH has a role to play, or sometimes many roles to play. And we're going to continue to have discussions with everybody about how we can all put the proper amount of intensified pressure on this group [DAESH]."

Contrary to its restrained statements, the PYD started an offensive to capture an air base controlled by moderate opposition forces in northern Aleppo this week. Opposition groups blame the PYD, which is backed by Russian airstrikes, of trying to take predominantly-Arab villages near the PYD-controlled Afrin canton.

The Britain-based Syrian Observatory for Human Rights also said YPG fighters are trying to capture the former Syrian air base, which fell to the opposition in August 2013.

The PYD also targets Azaz, near the Turkish province of Kilis, to complete the establishment of its cantons. The PYD is reportedly benefiting from an offensive by regime forces loyal to Syria's Bashar Assad who are backed by continuous Russian airstrikes.
Last Update: Feb 11, 2016 2:58 pm
RELATED TOPICS