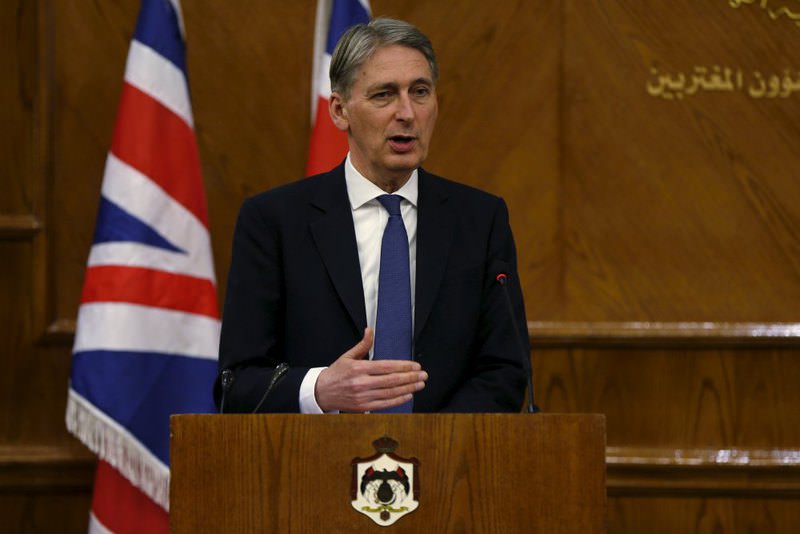 by Anadolu Agency Feb 11, 2016 12:00 am
Russian airstrikes on the Syrian opposition are serving to strengthen DAESH in the region, British Foreign Secretary Philip Hammond said Wednesday.

"Russia and the regime [of Syrian President Bashar Assad] are deliberately targeting the opposition and thus strengthening DAESH," he said following a meeting with Riyad Hijab, the leader of the Syrian opposition High Negotiations Committee. "Their actions against civilian populations and infrastructure are in breach of international humanitarian law."

His comments came hours after Britain's special representative to Syria, Gareth Bayley, accused Russia of conducting a "scorched earth policy" against Syrian opposition forces and civilians. A recent offensive backed by Russian air power has seen Assad's forces score a series of victories against rebel groups while forcing tens of thousands of civilians from Aleppo province toward the Turkish border.

Hijab, who defected from Assad's government in 2012, was the chief negotiator for the opposition at the recent United Nations-brokered peace talks in Geneva, which were suspended last week following intensified hostilities in Syria.

Hammond said Britain remained committed to talks and a "Syrian-led political transition" as the route to ending the five-year conflict that has killed at least 250,000 and displaced 11 million.

"In my meeting with Dr. Hijab, I reaffirmed my support for the Syrian opposition's Higher Negotiations Committee," Hammond added. "We agreed on the need to bring an urgent end to the suffering in Syria, for the regime and Russia to end attacks on civilians immediately and for full humanitarian access to be granted to besieged areas."
RELATED TOPICS