Refugee waves will not only hit Turkey, but also Europe, Ankara warns 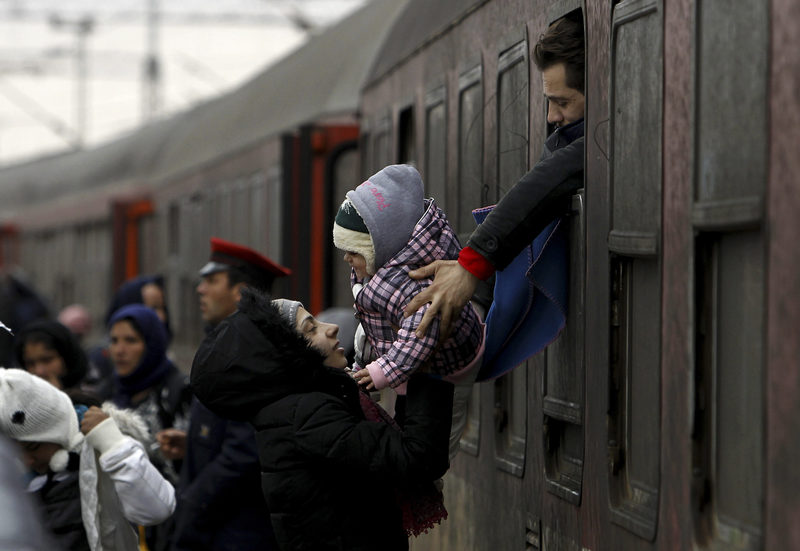 As the Russia-backed Syrian regime continues its indiscriminate offensive on Aleppo, hundreds of refugees could arrive in Turkey, which would have an impact on Europe as well, Deputy PM Akdoğan said

Deputy Prime Minister Yalçın Akdoğan on Friday lashed out at calls from Western countries for Ankara to open its borders to tens of thousands of Syrian refugees fleeing Russian airstrikes and stressed that no one should teach humanitarian lessons to Turkey since the country has already been doing its best to tackle the refugee crisis. He added that a possible new influx of refugees would also impact EU countries. Akdoğan visited Kilis province on the Syrian border on Friday where thousands of Syrian refugees fled from Aleppo after Russian airstrikes and examined preparations by the Disaster and Emergency Management Authority (AFAD) and aid organizations. "Turkey has opened its doors to whoever has escaped death, but the international community has left Turkey alone. Therefore, no one should dare teach humanitarian lessons to Turkey," he said, adding that there is a risk of 600,000 more people fleeing to Turkey. Responding to criticism concerning the closure of Turkey's borders, Akdoğan said: "The number of refugees that Turkey has taken in so far is 2.627 million. An additional 172,000 Iraqi refugees are also in Turkey. Due to the recent Russian bombing, another refugee wave has occurred, and as a result, new refugee camps have been constructed. Currently, nine refugee camps meet the needs of 100,000 refugees."

Asserting that Turkey has been left alone to deal with the refugees, Akdoğan said that Ankara maintains its open-door policy for those escaping the war. He added: "With efforts to place Turkey in a difficult condition, there have been new refugee waves created. We must not be tricked into any plots while providing asylum to refugees."He also mentioned another wave of Syrian refugees heading to Europe. Akdoğan said: "It is important to have a secure area on the Jarablous-Azaz line, and international cooperation is necessary, as Europe may also face a new influx of refugees. We have conveyed the first project to the European Union in terms of aid to Syrian refugees. The monetary support that Turkey receives from the EU is not for the government, but rather for Syrian refugees."

He said that Turkey has opened its doors to those in need in a humanitarian crisis and said it is necessary to consider and work on mid-term plans. "We are preparing a strategy file at the request of Prime Minister Ahmet Davutoğlu that aims to comprehensively analyze and consider matters ranging from housing to citizenship," he said.

President Recep Tayyip Erdoğan also slammed the United Nations on Thursday for what he called its double standards regarding the Syrian crisis and said that it was insincere of the U.N. to call on Turkey to open its borders to refugees instead of taking action in Syria. He harshly criticized the U.N. and others for urging Turkey to open its doors to Syrians waiting at its borders. "It is hypocritical to remind Turkey of its international responsibilities," Erdoğan said, and asserted that Turkey has done more than anybody else, which can be seen by the number of refugees accepted by each country.
Last Update: Feb 15, 2016 12:02 pm
RELATED TOPICS