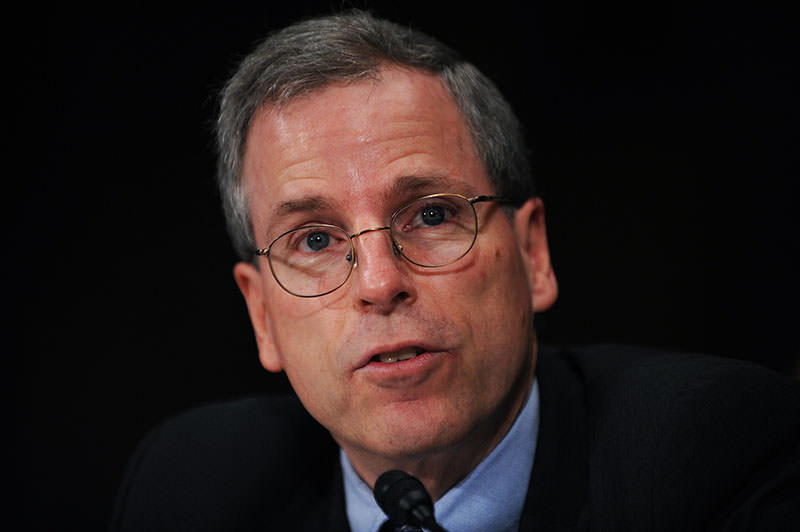 A picture dated March 16, 2010 shows ambassador Robert Ford appearing before a full committee hearing on his nomination to be ambassador to Syria (AFP)
by Daily Sabah with AA Feb 13, 2016 12:00 am
If Turkey is not happy with the result of the Munich deal on Syria, then it might take steps to change it, according to a former U.S. envoy, who conducted an exclusive interview with Anadolu Agency (AA).

Robert Ford, U.S. ambassador to Syria between 2010 and 2014, noted the significance of a potential role that Turkey and Saudi Arabia may play in the Syrian crisis.

"Turkey's role with the armed opposition is very important. Turkey has a lot of influence and if Turkey is not happy with the result of Munich then Turkey has the ability to help the opposition to get a better result," the ex-ambassador said.

With 2.62 million Syrian war survivors and 26 different camps, Turkey has become the country hosting the biggest number of refugees in the world.

Contributing nearly $9 billion to humanitarian aid during the Syrian crisis process, Turkey's aid for Syrian refugees has been 20 times more than aid received from international organizations, according to Prime Ministry's Disaster and Emergency Management Authority.

The UN's Refugee Agency has so far granted only $455 million to Turkey for helping refugees.

Ford – who now works as senior fellow at the Washington-based Middle East Institute – said during his interview with AA that the implementation of the Munich deal on Syria will be difficult if the Bashar al-Assad regime and Russia continue to bomb opposition strongholds.

Ford noted Assad's remarks calling the opposition in the war-torn country as "terrorists".

"He [Assad] said he would not stop fighting terrorists," Ford added.

Assad's comments came just hours before the global and regional powers reached a deal in the German city of Munich.

The Syrian regime head said he would back peace talks but warned that negotiations did "not mean that we stop fighting terrorism".

According to the Munich deal, cessation of hostilities between the opposition and the regime would allow humanitarian aid access to places under the regime's siege, which continues to deprive hundreds of thousands of people of their basic needs.

However, the deal exempted strikes against Daesh and Al-Nusra Front, a group deemed by the U.S. as a terrorist group.

"The Russians say that all fighters in Aleppo are terrorists," Ford said, predicting that Russia would continue to bomb Aleppo.

He claimed that neither the Syrian government nor the Syrian opposition is prepared for "real negotiations and real compromises".

The former ambassador also noted U.S. choice of words regarding the Munich deal.

Secretary of State John Kerry had refrained from using the word "cease-fire" while announcing the agreement. Instead he called it "cessation of hostilities".

When asked about it, Kerry said the two phrases had different legal requirements, but with similar results.

"A cease-fire has great many legal prerogatives and requirements. A cessation of hostilities does not. But in many ways they have a similar effect," he said.

"A cease-fire in the mind of many participants in this particular moment connotes something far more permanent and far more reflective of sort, of an end of conflict if you will. And it is not that," he added.

According to Ford, this agreement will not be different from the two failed previous attempts one in 2011 by the Arab League and the other in 2012 by UN special envoy Kofi Annan.

Both of the attempts failed and most likely this one will be the third, he said.

He said that the war-torn country may be partitioned in the future.