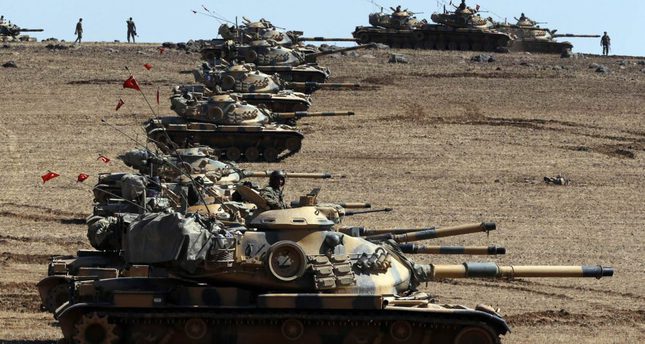 by Daily Sabah with AA Feb 14, 2016 12:00 am
A Turkish border post was hit by mortar fire from Syria on Sunday, Turkey's Defense Minister İsmet Yılmaz said.

The bombardment by the PKK's Syrian wing Kurdish Democratic Union Party (PYD) militia hit the post in Kilis province and the Turkish military responded with shellfire, Yılmaz told a parliamentary budget meeting. He did not say how many bombs landed.

"When a strike hits our border within the rules of engagement it will be responded to in a dissuasive way," he said.

There were no casualties on the Turkish side of the frontier, the minister added.

Turkish troops have shelled PYD positions around Azaz in northern Syria since Saturday in response to artillery strikes on Turkey.

The PYD is the Syrian affiliate of the PKK, which is listed as a terror group by Turkey, the U.S. and EU and has waged war against the Turkish state since 1984.

Located six kilometers (four miles) south of the Turkish border, Azaz has been the scene of recent heavy fighting as the PYD has advanced during a Russian-backed Syrian regime offensive against opposition forces.
Last Update: Feb 15, 2016 3:14 pm
RELATED TOPICS