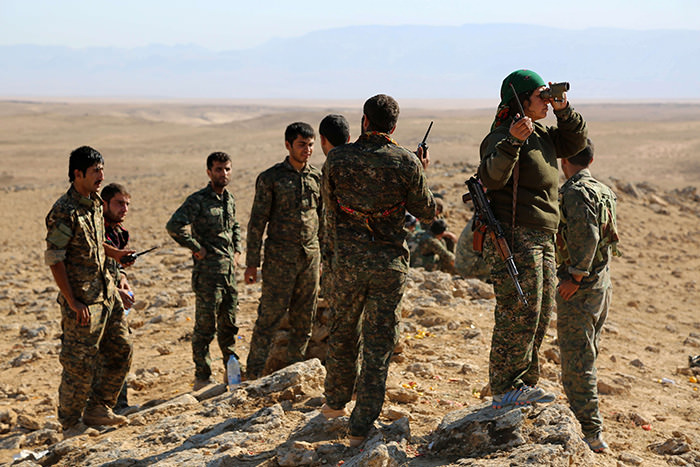 by Daily Sabah Feb 18, 2016 12:00 am
The People's Protection Units (YPG), an affiliate of the PKK terror organization, has renamed the Mannagh air base in Syria "Serok Apo" (Leader Apo), referring to the PKK's imprisoned leader Abdullah Öcalan, The Times U.K. daily reported on Thursday.

Meanwhile, the terrorist organization has also changed the name of Syria's northern town of Tel Rifaat to "Arpet" the report added.

On Tuesday, the Assad regime declared its support for PYD/YPG terrorists, puzzling the leaders in Washington, who refer to the PYD/YPG as their "partners."

Turkey has responded to attacks launched from PYD/YPG-held areas around Azaz for almost a week, following the rules of engagement, in response to violence launched by the terrorist group that has endangered the national security of Turkey.

Addressing the PYD/YPG, Prime Minister Ahmet Davutoğlu recently said: "The YPG must move away from Azaz at once. It should not even come close [to Azaz]." He also made Ankara's stance crystal clear, saying that the YPG should not dare to use the Mannagh military airport. "If they don't remove themselves from the Mannagh airport, we'll destroy it," he added.