Turkey has right to self-defense against terrorism, Obama tells Erdoğan 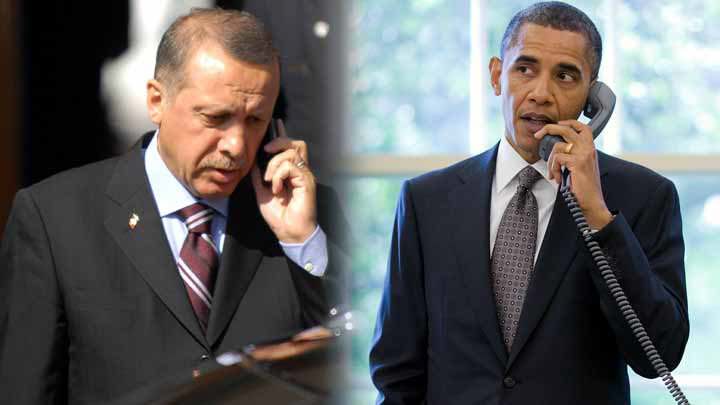 by Daily Sabah Feb 19, 2016 12:00 am
U.S. President Barack Obama voiced his concerns to President Recep Tayyip Erdoğan on Friday about the PYD/YPG's advance in northern Syria and said the U.S. defends Turkey's right to self-defense against terrorism.

Obama called Erdoğan to offer condolences for the suicide bomb attack in the Turkish capital Ankara on Wednesday that killed at least 28 people. The two leaders also discussed the situation in Syria during the phone call which lasted an hour and 20 minutes, Turkish presidential sources said.

During the phone conversation, Obama told Erdoğan that he called on the PYD/YPG to immediately stop its provocative acts which are generating tension with Turkey and Syrian opposition and undermining the fight against Daesh, the Turkish presidential sources said.

Obama also told Erdoğan that the U.S. is determined to keep supporting its NATO ally, Turkey, against terror threats and said the U.S. recognizes Turkey's right of self-defense.

The Turkish presidency said Obama and Erdoğan agreed to increase cooperation in the fight against what it called terrorist groups, including the PKK.

Turkey was shaken by a deadly car bombing that rocked Ankara on Wednesday, killing 28 people and injuring 81. The attack was carried out by a Syrian national named Saleh Nejar, 24, who was born in Syria's Hasakah province.

Turkish authorities have detained 17 suspects in operations carried out across the country. The PYD and its YPG are largely accepted as the Syrian affiliate of the PKK, which is recognized as a terror organization by the U.S., EU and NATO.