Russia, US agree to truce deal for Syria, but strong doubts persist 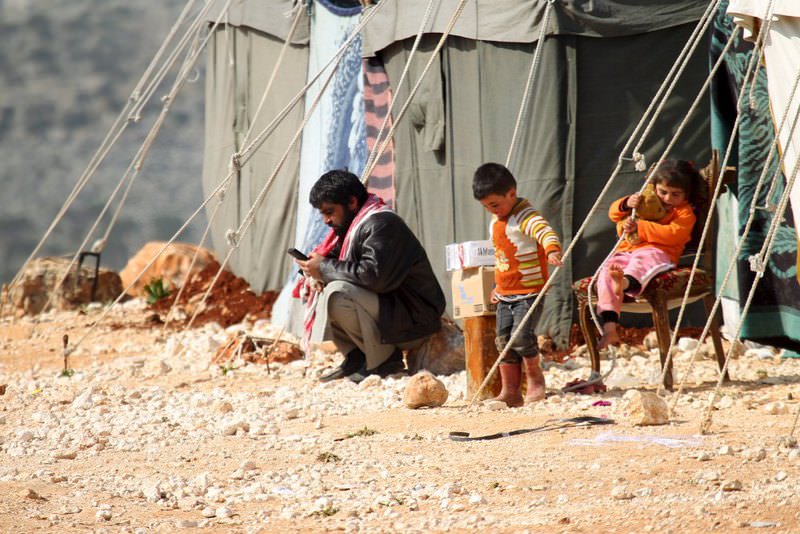 An internally displaced Syrian family that fled from Russian agression in Aleppo rests near tents in the village of Batabo in northern Idlib on Feb. 14.
by Daily Sabah Feb 24, 2016 12:00 am

The United States and Russia have announced plans for a partial truce in Syria amid serious doubts that it will take effect on Saturday as planned. The agreement does not apply to extremist groups like DAESH and al-Nusra Front, putting major hurdles to how it can be implemented on Syria's complex battlefield

The United States and Russia have announced plans for a partial truce in Syria but there are serious doubts that it will take effect on Saturday as planned. The agreement does not apply to terrorist groups such as DAESH and al-Nusra Front, causing experts to wonder how the truce will be implemented on Syria's complex battlefield. It calls for the regime and opposition forces to reach an agreement by noon on Friday in compliance with the "cessation of hostilities" expected to take effect at midnight that same day.

The leading opposition group conditionally accepted the deal but there has been no statement given by the regime since the agreement was announced late on Monday.

Moscow and Washington have been leading the latest diplomatic push toward a resolution for Syria's nearly five-year civil war, a brutal conflict that has claimed the lives of more than 260,000 and displaced millions of Syrians. The two countries are on opposing sides of the conflict – with Russia backing Assad and the United States supporting the opposition – but, in recent weeks, the two world powers have joined forces, pushing for the cease-fire. "This is a moment of opportunity and we are hopeful that all the parties will capitalize on it," White House press secretary Josh Earnest said after U.S. President Barack Obama and his Russian counterpart, Vladimir Putin, discussed the deal over the phone. Putin said that Moscow would do "whatever is necessary" to ensure Damascus respects the agreement. "We are counting on the U.S. to do the same with regard to the allies and groups that it supports," he said.

U.N. Secretary General Ban Ki-moon called the deal a "long-awaited signal of hope" and urged all sides to abide by it.

Analysts say that considering conditions on the ground; in particular, the complicated make-up of Syria's opposition forces and the frequently shifting frontlines – the looming cease-fire may already be doomed to fail. According to senior analyst Noah Bonsey of the International Crisis Group: "The 'Cessation of Hostilities' allows attacks on Nusra [to continue]. That undoubtedly dooms [the operation] since Russia and the Assad region tend to strike others and call them the Nusra front (or DAESH)," according to a tweet on the analyst's Twitter account. "To have any chance of addressing this, the U.S. and Russia must delineate Nusra-occupied areas before implementation [of the cease-fire]."

The cease-fire plan was announced by top diplomats in Munich earlier this month but the initial plans failed to be brought to fruition last week. Aiming to reduce violence while also expanding humanitarian accessibility, the plan will pave the way for resuming peace talks that collapsed earlier this month in Geneva. The talks had been scheduled to resume on Feb. 25, but the U.N. Syria envoy has already acknowledged that date is no longer realistic.

Syria's main opposition group has said that it would accept the cease-fire deal announced by the U.S. and Russia on Monday if humanitarian "conditions" were met.

The statement, made bythe Riyadh-based High Negotiations Committee, came on the heels of an announcement from Moscow and Washington regarding a cease-fire in war-torn Syria which is set to begin overnight Friday into Saturday.

"After HNC general coordinator Riad Hijab presented the results of his discussions with opposition factions across all fronts, we agreed to respond positively to international efforts to reach a truce deal," the HNC said. But its, "commitment to the truce is conditional" on ending sieges, releasing of prisoners, halting the bombardment of civilians and delivering humanitarian aid. The statement said the cease-fire "should be announced simultaneously by all sides." It also quoted HNC head Hijab as saying that he is not optimistic that the Assad regime and its allies "will be able to commit to ending their hostile acts."
RELATED TOPICS