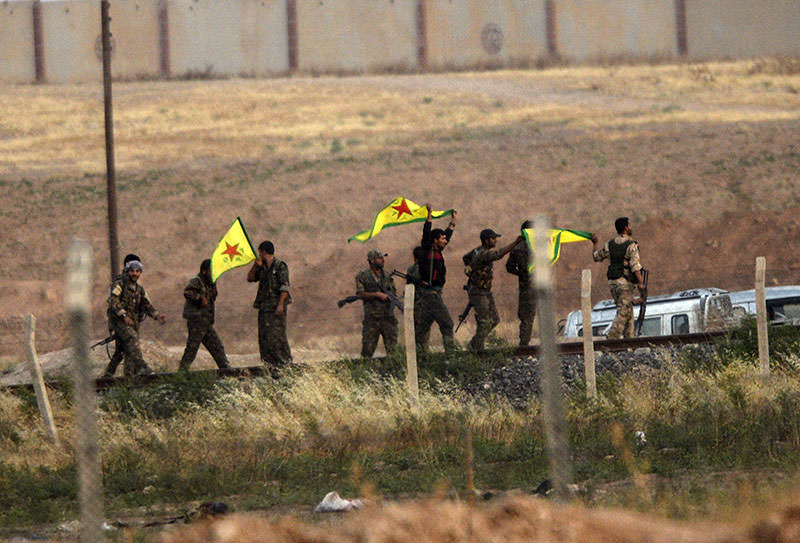 YPG forces hold their movement's flag near the Aku00e7akale crossing gate between Turkey and Syria at Aku00e7akale in u015eanlu0131urfa province on June 15, 2015. (AFP)
by Daily Sabah Feb 25, 2016 12:00 am
The ruling Justice and Development Party (AK) Party spokesperson Ömer Çelik criticized People's Protection Units (YPG) on Thursday during a press conference in the capital Ankara, saying the group was exploiting the current situation in Syria for its benefit.

"The terror organization named YPG is playing a game with big powers. It is trying to come up with a strategy availing itself of their [big powers] uncertain Syria policies," Çelik said.

The YPG fighting with Daesh does not make it a non-terror group, Çelik said, pointing out that the Nusra Front, which Turkey also designated as a terror group, was also fighting Daesh extremists.

The deputy prime minister said, Turkey's precautions in the region were undertaken to avoid being a participant of war in Syria and not as part of a war scenario, referring to the country's shelling of YPG/PYD targets in Syria. Ankara considers YPG as a terrorist entity and a threat to Turkey's national security. It says the group is attempting ethnic cleansing of the non-Kurdish population in northern Syria.

Çelik also touched upon the Peoples' Democratic Party (HDP) deputy Tuba Hezer's attendance to the funeral of the terrorists who perpetrated the Ankara bombing last week, which killed 29 people and wounded dozens.

He said, Hezer's action is not only incompatible with the principles of the Turkish parliament, but also with humanity in general. "Such an action has never been encountered in Turkey, but I do not think that it has ever been seen in the world either," he said.

"We also condemn this party, which this person [Hezer] is a member of, for not condemning this action. This is being part of the crime that has been committed against humanity."