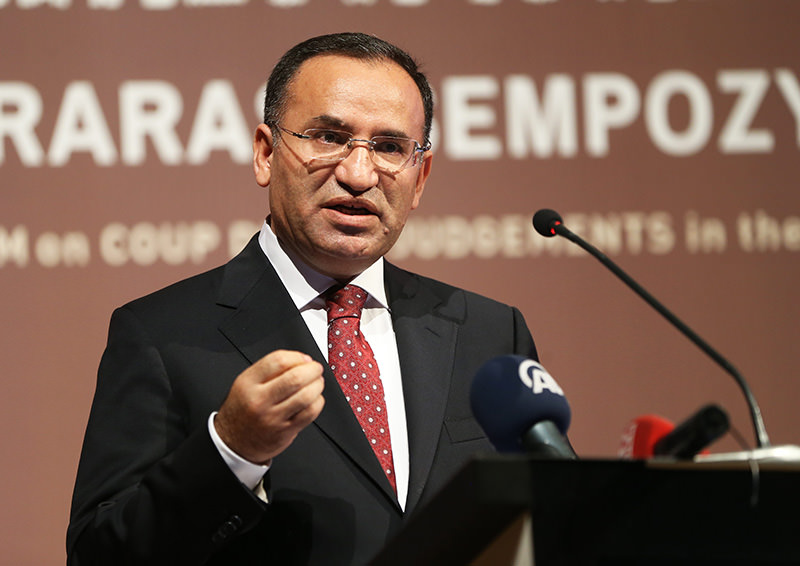 | AA photo
by Daily Sabah Mar 01, 2016 12:00 am
President Recep Tayyip Erdoğan's criticism of the Constitutional Court's decision regarding the release of Cumhuriyet daily's two high-level employees Can Dündar and Erdem Gül from jail, is a democratic right, Justice Minister Bekir Bozdağ said in parliament on Tuesday while answering questions from reporters, according to various media outlets.

"The president said he believed that the court [Constitutional Court], which is supposed to act in line with human rights agreements which Turkey sides with, violated the constitution regarding a decision which is clearly a breach of the constitution and laws," the minister said.

"Therefore there is no more natural thing than the president saying this [criticizing the court's decision] like everyone else."

Thereafter, a reporter asked the minister if he personally believed the top court's decision was "an open violation of the constitution," to which Bozdağ said he will make a comment later on regarding this issue.

Turkey's Constitutional Court gathered last week and decided by a majority of votes (12 against three) that there was an infringement of rights concerning the arrests of Can Dündar and Erdem Gül.

After the top court's decision, Dündar and Gül were freed in the early hours of Friday. The decision for their release from jail however was criticized by President Recep Tayyip Erdoğan, just before leaving for west Africa on Sunday in a press conference held at Atatürk International Airport.

Erdoğan said that he did not "respect" nor "abide by" the top court's decision and the case involved espionage and had nothing to do with freedom of speech.

At about the same time, the president of the Constitutional Court Zühtü Arslan was holding an opening speech at an event in the capital Ankara where he stated that everyone had the right to criticize the top court's decision, but at the same they had to abide by the court's rulings.

Dündar, Cumhuriyet daily's editor-in-chief, and Gül, its Ankara bureau chief, were arrested in November over allegations including espionage, attempting to overthrow the government and supporting terrorism.

An investigation was launched into Dündar and Gül after the newspaper published images in May purportedly showing shells and ammunition loaded on Syria-bound trucks belonging to Turkey's National Intelligence Organization (MIT).

They had been held on remanded in custody since their arrests.