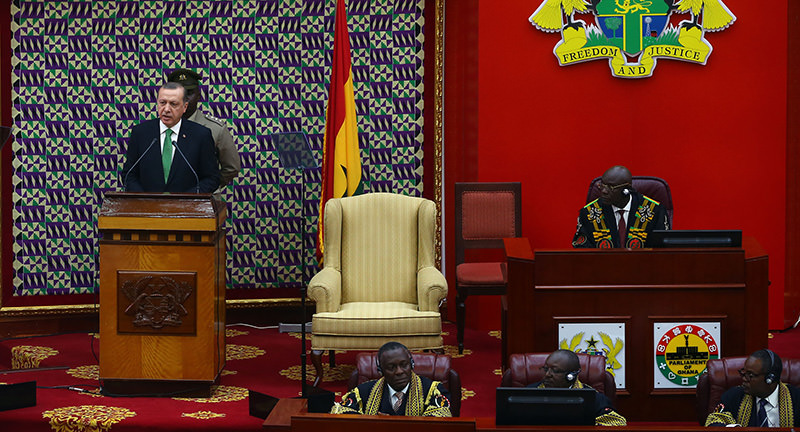 | AA Photo
by Daily Sabah with AA Mar 01, 2016 12:00 am
President Recep Tayyip Erdoğan said Tuesday that Turkey is determined to contribute to regional peace both in Ghana and the region and to boost economic ties.

Speaking in Ghana's capital Accra, he said, "Both Turkey and Ghana are determined to expand mutual cooperation. There is a very obvious political will between us to do that".

Erdoğan was received with an official welcoming ceremony by Ghanaian President President John Dramani Mahama at the Flagstaff House after the two leaders held a joint press conference.

Erdoğan arrived in Accra last night to attend the Turkey-Ghana Business Forum. He will also address the country's parliament before proceeding to Nigeria and Guinea, the next stops on his African tour.

The president underlined that the United Nations should be reformed with regards to providing aid to underdeveloped countries, while he noted that Turkey and African countries suffer from terrorism, and must take a united stance against it.

Erdoğan said that over the last five years Ghana and Turkey have signed at least 18 agreements and memorandums of understanding.

"Last year's trade volume between Turkey and Ivory Coast was $400 million. Our goal is to boost this to $1 billion by 2020," he added.

During the press conference, Mahama welcomed an invitation for Ghanaian Defense Ministry officials to visit Turkey.

"We all know Turkey has a very developed defense industry and we are willing to develop cooperation on that issue," he said.

In the area of education, Turkey has traditionally offered scholarships to Ghana, and under bilateral discussions, the number of scholarships will be raised to 35, he added.

Mahama stressed that the new scholarships would especially target girls, particularly those who want to study science and technology.