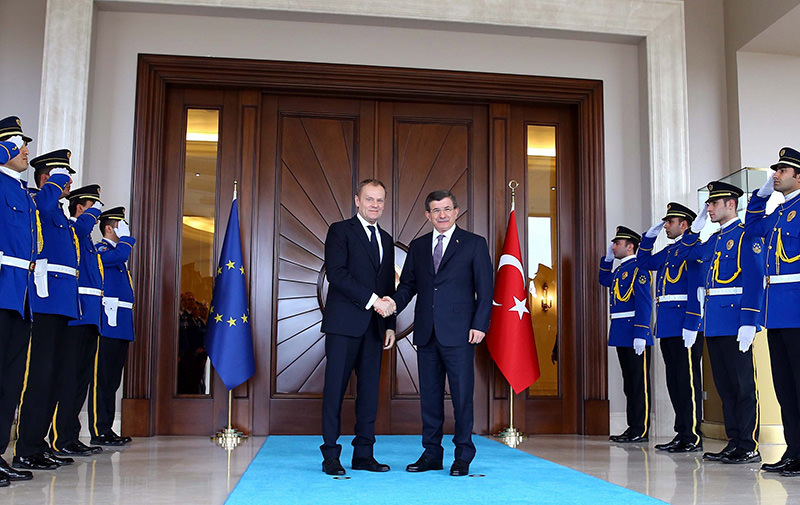 | EPA Photo
by Daily Sabah Mar 03, 2016 12:00 am
Prime Minister Ahmet Davutoğlu said Ankara abides by the joint refugee action plan that was signed with the European Union and will continue to fulfill its part.

Speaking at a joint press conference with European Council President Donald Tusk in Ankara on Thursday afternoon, Davutoğlu said Turkey had taken solid steps to fulfill the EU's requirements for the visa-free travel agreement that would allow Turkish citizens to travel to the Schengen zone without obtaining a visa.

Tusk said that their aim is to decrease the number of migrants coming illegally, which is becoming a continuous situation, the importance of which cannot be dictated by the numbers of refugees arriving in the EU. "Both Turkey and the EU are working hard on the issue. We need a bit more time," he said.

Commenting on the refugee crisis that troubles Turkey and the EU, Davutoğlu said Bashar Assad's regime and terrorist organizations that erupted on the scene due to the chaos in the country are the source of the refugee crisis. "It is the EU and Turkey that are paying the price of this. Turkey and the EU pay great importance to the cease-fire. Unfortunately, violations make the truce fragile" he said.

Turkey will meet the EU's 28 leaders on March 7 for a wide-ranging summit on the worst refugee and migrant crisis facing Europe since World War II. Davutoğlu is expected to attend the meeting.

With more than 2.5 million refugees, the most in the world, Turkey is a major transit country for refugees and migrants seeking to enter Europe over the Aegean route.

Under the refugee action plan, the EU agreed to offer 3 billion euros to Ankara to meet the needs of refugees in Turkey, visa liberalization for Turkish citizens and speeding up EU accession talks in exchange for Turkey stemming the flow of refugees seeking to enter Europe by leaving Turkey for Greece.

Upon a reporter's question, PM Davutoğlu also touched upon the Peoples' Democratic Party (HDP) co-chair Selahattin Demirtaş's call on Wednesday, urging the Kurds in southeastern Diyarbakır province to march into Sur district and break the curfew, which found only a small response.

Davutoğlu also thanked the locals of Diyarbakır for not giving heed to Demirtaş's call.

"Demirtaş's aim is to pour people onto the streets and drift Turkey into a chaos," the premier said.

Even though the call resulted in failure, President Recep Tayyip Erdoğan and Interior Minister Efkan Ala on the same day slammed it and pointed fingers at Demirtaş. "I don't believe that the locals and my Kurdish brothers and sisters will say yes to a call that smells like an invitation to terror. The duty of a deputy cannot be calling for crime. I think prosecutors should do their part," Erdoğan said.

Ala also strongly criticized Demirtaş's calls to break the curfew in Sur, and said "it was provocation."
Last Update: Mar 03, 2016 6:28 pm
RELATED TOPICS