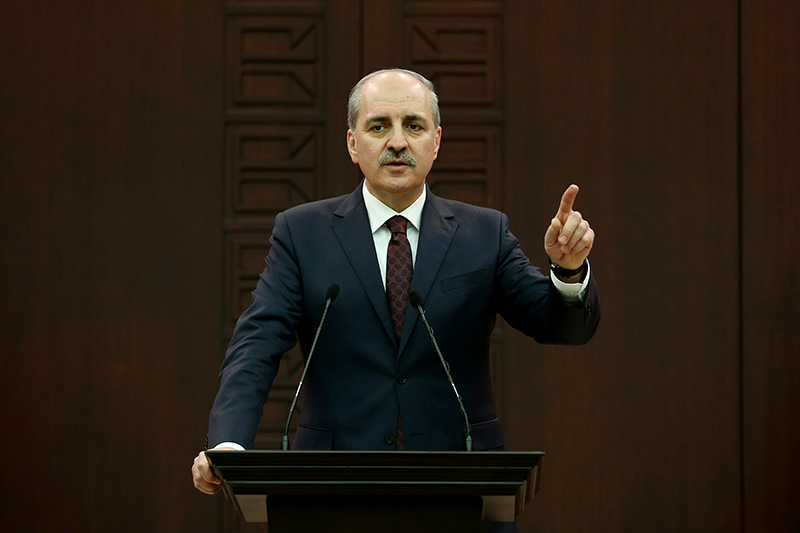 In an interview with Saudi-funded Arabic-language daily Asharq al-Awsat, Kurtulmuş said that the Syrian people should have the final say on the fate of the Bashar Assad regime.

"What is happening [in Syria] is a new Sykes-Picot agreement," Kurtulmuş said, referring to the secret agreement following World War I between Britain and France that defined their post-war spheres of influence in the Middle East.

He said certain powers sought to impose a "new phase" of the agreement aimed at partitioning some countries in the region.

"The main focus of some [powers] is to divide Islamic countries along sectarian and ethnic lines in an attempt to create more problems between ethnic groups," he said.

He said certain parties were now speaking about dividing Syria into three distinct entities. "The fact is that Syria could be divided into 30 or 40 different parts," he said.

Kurtulmuş called for bringing Syria's various ethnic and religious groups together. "Our main focus is to protect Syria as a unified state," he asserted.

He said the Syrians could establish -- through a peace process -- a new regime in Syria. "But we have to maintain Syria's territorial integrity," he said.

He went on to urge different groups in Syria "to find the best way to participate in the search for a political solution" to the five-year-old conflict.

PM Ahmet Davutoğlu on Sunday also emphasized the maintenance of Syria's territorial integrity, rejecting any scenarios for partitioning the country.

"We have agreed that Syria will sustain its presence as a strong, unitary Syria. We do not want a partitioned Syria," Davutoğlu told reporters ahead of his departure for Brussels, where he will meet German Chancellor Angela Merkel and Mark Rutte, prime minister of the Netherlands, the holder of the rotating EU presidency.

Davutoğlu said he discussed the issue with Iranian officials on Saturday's visit to Tehran and evoked the Sykes-Picot agreement, the 1916 secret agreement between Britain and France that established the borders of the modern Middle East, and is widely blamed for many of its current woes.

"100 years ago, Sykes-Picot partitioned the region. We should not allow again the division into small pieces. We must enter into efforts that could unite the region on a large scale. Here, there are contributions Iran and Turkey can make," the prime minister said.

Kurtulmuş reiterated that the Syrian people should have the final say on the fate of the Assad regime.

"After five years of civil war and fierce bombardment of innocent civilians by the Syrian regime, we believe that the Syrians will not allow Assad to remain in power," he said.

He added, however, that there could be a transitional period in Syria within the context of a peace process. "The future Syria should be free of terrorist organizations and members of the current regime," he said.

According to UN figures, more than 250,000 people have been killed and more than 10 million displaced since the Syrian conflict erupted in early 2011.

The Syrian regime and opposition groups are scheduled to begin UN-sponsored peace talks in Geneva on Monday.

Kurtulmuş warned that foreign intervention in Syria could lead to a regional war.

"World powers, particularly the U.S. and Russia, realize that the [Syrian] war has reached its maximum limits; this could give a fresh impetus to the peace process," he said.

The deputy premier voiced optimism regarding the launch of a "genuine" peace process in Syria.

"At the end of the day, the key player in Syria is the Syrian people -- not the major [political] powers," he said.

Kurtulmuş also dismissed the notion of any confrontation between Turkey and Russia over Syria.

"Russian moves are not directed at Turkey," he asserted, saying, rather, that they were directed at the western NATO alliance.

"The Russians have expanded their northern border in eastern Europe by annexing Crimea. This was a message to NATO and western countries," he said.

"Today, by intervening in Syria, the [Russians] are drawing their southern border with the NATO," he said.

Tension has mounted between Turkey and Russia since last November when Ankara shot down a Russian warplane that had violated its airspace.

"We have defended the Syrian people, particularly the moderate opposition, our Turkmen brothers and others," he said. "We have also announced our rules of engagement and we have underlined Turkey's right to defend its border."

The deputy premier went on to say that Turkey did not support the establishment of a Kurdish state inside Syria.

"We do not see any room for this," he said. "Syria must remain united."

"Today, we have identical viewpoints on regional crises, particularly the Syrian issue," he said. "[But] we do not have any joint plans for intervening in Syria."

"The problem is not with the Egyptians, but with the military coup," he said, referring to the Egyptian army's 2013 ouster of elected President Mohamed Morsi.

Following Morsi's overthrow, the Egyptian authorities launched a relentless crackdown on his supporters, killing hundreds and detaining tens of thousands.

Hundreds of supporters of Morsi and his Muslim Brotherhood group have since been sentenced to death on violence-related charges, including Morsi himself.

Turkey remains among the few countries that describe Morsi's ouster as a "military coup".

"We want to see some positive steps taken by the Egyptian regime, at least the reversal of the death sentences [handed down against Morsi supporters]," Kurtulmuş said.
Last Update: Mar 07, 2016 4:37 pm
RELATED TOPICS