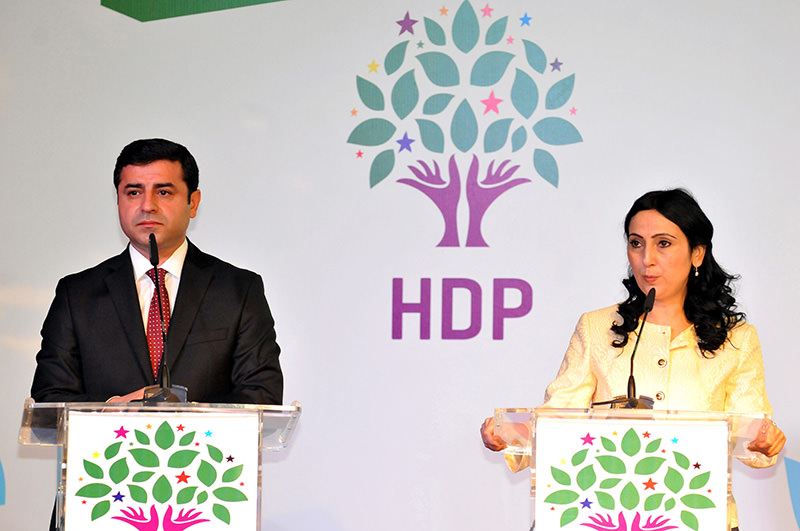 by Anadolu Agency Mar 09, 2016 12:00 am
The parliament has received Wednesday the official appeal that seeks to lift the legislative immunity of the co-chairs of the opposition Peoples' Democratic Party's (HDP), along that of three other deputies.

The Ministry of Justice sent a related summary of proceedings on Friday.

The office of the parliament speaker then forwarded the motion to the joint parliamentary commission on constitution and justice, which will decide whether the general assembly should vote on lifting the immunity.

If put to a vote, the motion to lift the HDP MPs' immunity requires an absolute majority, i.e. 276 votes.

The move springs from an investigation by the Diyarbakır chief public prosecutor into the speeches of the five deputies on an alleged "declaration of autonomy" during a December meeting of a group affiliated with the party in southeastern Turkey.

Last December, in a meeting in Diyarbakır, Demirtaş said his party would support calls for the formation of "democratic autonomous regions" in Turkey's southeast.

The prosecutor's office summary was sent last month to the Justice Ministry with a request that the immunity of the HDP deputies be lifted, so they can face charges of "openly instigating people to hatred and hostility" and "being a member of an armed terrorist organization".

Prime Minister Ahmet Davutoğlu had previously broached the idea of lifting the immunity of HDP parliamentarians due to the party's alleged support for terrorism.

The call had the backing of the Nationalist Movement Party (MHP), while the Republican People's Party (CHP) opposed it. The ruling Justice and Development (AK) Party supports it.
Last Update: Mar 09, 2016 2:21 pm
RELATED TOPICS