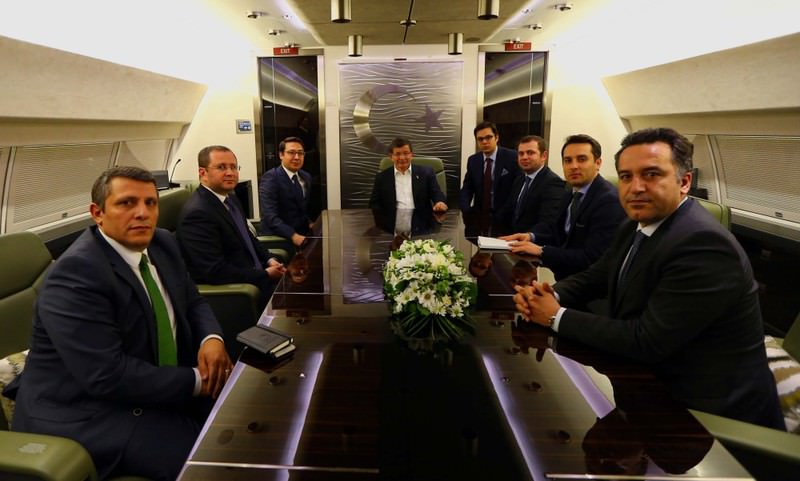 PM Davutoğlu said that the negotiation process with EU leaders in Brussels was productive and Turkey's game changing proposal, has the potential to tackle the refugee crisis. He also indicated that there was an urgent need for reaching an agreement to stem the refugee flow

Prime Minister Ahmet Davutoğlu, speaking to reporters accompanying him early Tuesday during his return flight after the EU-Turkey summit in Brussels, described the proposals he presented to EU heads of state and governments on Monday as a game changer that had the potential to overcome the refugee crisis. "It was a fruitful negotiation process," he said in reference to the summit, which ran into early hours of Tuesday. On the flight to Brussels, he gathered all his officials and discussed a 12-article plan on what Turkey and the EU needed to do to resolve the uncontrolled refugee flow, he said.

"To tell you the truth, there were parts that were hard to accept under normal conditions. There was a definite need for a step, a game changer. If we continued as we have, there was no way we could stem the refugee flow and that would have harmed our ties with the EU." Under the preliminary deal agreed to between Turkey and the EU late yesterday, Turkey will take back migrants who are picked up on the Aegean Sea that separates Turkey from Europe or who have arrived in Greece but have not applied for asylum there. Based on a one-for-one principle, EU countries will accept migrants from Turkey who are likely to obtain asylum.

The EU has promised to double the 3 billion euros it will transfer to Ankara for the refugees' upkeep, lift visa restrictions on Turkish citizens by the end of June and take steps to accelerate Turkey's EU membership negotiations. Turkey and the EU agreed to hold another summit on March 18 to finalize any deal.

Davutoğlu said there will be a dramatic decrease in the number of refugees crossing to Greece within a month. "Once they realize they will be sent back, they will not even attempt to make the crossing," he said, adding: "This does not mean Europe will stop taking in refugees just because the flow has ended. Europe will continue to admit a designated number of refugees."

He said Turkey's plan was unanticipated. "Refugees have become a truly heavy burden. Not only Syrians or Afghans, all refugees, once they cross the Aegean, call their relatives to explain to them how to make the journey. They tell them where to buy a boat and what to do once they cross into Greece. Independent of the Syrian crisis, Turkey has become a magnet for migrants. What we said was this: Let's agree on such a deal that it prevents the abuse of migrants but does not remove Europe's obligation to admit them. In other words, we want to end human trafficking while allowing controlled admittances. We will send those who are returned to us back to their home countries if they are not Syrian. We'll place Syrians in camps. In exchange, Europe will admit one Syrian for every Syrian returned to us."

European countries already had a quota system, Davutoğlu said, adding: "This way we remove the hope of refugees reaching Europe through Turkey by crossing the Aegean."

He said 10,000 migrants had been returned to Turkey in a month. "Half are Syrians and the other half aren't. We will return them to their counties. Five-thousand Syrians will be placed in camps and the EU will allow 5,000 Syrians into Europe in a controlled fashion."

"This was not a plan they envisioned. They expected Turkey to stop the entire flow through intensive security measures. No matter how much you improve the measures refugees find a way to cross the Aegean Sea. We also argued that since the remittance agreement would begin before June, the lifting of the visa restrictions should also begin by June. As we need to pass certain laws for the deal, the lifting of the visa [requirement] should be done by the end of June," he said.

Concerning the agreement on increasing the amount of EU funding for Syrians in Turkey from 3 billion euros to 6 billion euros, Davutoğlu said he told the European leaders that the cost of hosting the refugees was constantly increasing and that all the cost of the remittance process and sending migrants back to their countries should be borne by the EU. "This means an extra 3 billion euros. [European officials] didn't mention it in their post-summit remarks because they need a summit decision for approval. They need to prepare for March 18. Europe will make 6 billion euros available, 3 billion euros for 2016 and 3 billion euros for 2017 and 2018. Additionally, we asked for the opening of membership negotiation chapters 15, 23, 24, 26 and 31. Greek Cyprus is resisting. We will see how these will be finalized on March 18."

Davutoğlu said Parliament needs to approve nine separate laws to ensure Turkish citizens could benefit from the lifting of the EU visa requirement. "The opposition has to support them. When I talked to [Republican People's Party Chairman Kemal] Kılıçdaroğlu and [Nationalist Movement Party Chairman Devlet] Bahçeli about the issue, they assured me of their support. However, they were blocking the passage of the law on the protection of personal data. If we pass all the necessary legislation in March and April, the European Council will present its report on May 1. The report will then need to be approved by all member parliaments. Our speed is of the utmost importance. This is a historic turning point." He also said European leaders had to pressure Greek Cyprus to consent to the visa plan.When asked who would decide which refugees will be sent to Europe, Davutoğlu said: "There is no such thing as the educated going to Europe and the uneducated remaining in Turkey. Such decisions will be through a process of which Turkey will be a part."

Davutoğlu also said that the final communique of the summit included sentences that can only be construed as a safe zone in Syria. He said German Chancellor Angela Merkel had held a video conference with U.K. Prime Minister David Cameron, French President François Hollande, Italian Prime Minister Matteo Renzi and Russian President Vladimir Putin. "Merkel briefed me on the discussions. She also told me about her conversation with [U.S. President Barack] Obama." During his meeting with Merkel, Hollande, Cameron and Renzi, one topic of discussion was the setting up of a safe zone in Syria, Davutoğlu said. "While some objected to the word, the text included in the communique inferred the safe zone. This is the first time such a text entered an EU document. We currently have no direct communication with Russia. I asked Merkel to talk to Russia while we conferred with regional countries. And then we can all talk to the U.S."

SMS DIPLOMACY WITH MERKELDavutoğlu said he met with Merkel and Dutch Prime Minister Mark Rutte, who is also the EU term-president, on the night prior to the Turkey-EU summit. "The meeting lasted for six hours. We discussed our 12-point plan with Merkel and Rutte, neither of whom expected such a step. Then in the morning, we met with European Parliament President Martin Schulz and European Commission President Jean-Claude Juncker. Then we met up with [Greek Prime Minister Alexis] Tsipras and then went to the summit." Merkel, once presented with the Turkish plan, wanted to change the flow, Davutoğlu said. "They wanted to gather the European Council to discuss our plan. We met and I answered all their questions. Then there was a break when they gathered again."

Davutoğlu said that when the 28-member European Council met, he went to meet with NATO Secretary-General Jens Stoltenberg. "Still, we continued to exchange text messages with Merkel about their meeting. Then we met with Merkel again, after which they gathered again. We had a few objections, which were resolved. The most encouraging thing is the state of ties between Turkey and the EU is much-improved compared to four or five months ago."
RELATED TOPICS