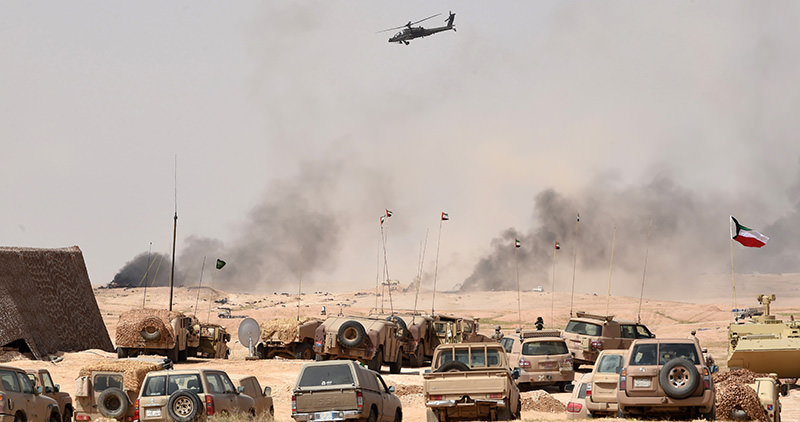 A picture taken March 10, 2016 shows an apache helicopter flying during the Northern Thunder military exercises in Hafr al-Batin, 500 kilometres north-east of the Saudi Capital Riyadh on March 10, 2016 (AFP Photo)
by Daily Sabah with Agencies Mar 12, 2016 12:00 am

Heads of state from across the Muslim world gathered in Saudi Arabia on Thursday for the conclusion of a nearly three-week-long historic counter-terrorism military exercise with the participation of 20 Muslim-majority countries, with Turkey sending a delegation headed by Defense Minister İsmet Yılmaz to observe the drills.

Saudi state television carried images of tanks firing missiles and helicopters circling overhead in what local media have called the largest exercise ever held in the Middle East in terms of the number of countries taking part.

The closing ceremony at King Khalid Military City in northern Saudi Arabia was attended by King Salman bin Abdulaziz and senior officials from 11 countries, including the presidents of Egypt, Sudan and Yemen, the emirs of Kuwait and Qatar and the prime minister of Pakistan.

The military drills, dubbed "Northern Thunder", took place in an area near Saudi Arabia's northeastern border with Iraq and Kuwait. The training focused on how to coordinate combat operations and guerrilla warfare tactics among the Muslim-majority countries that are members of a larger counter-terrorism alliance announced by the kingdom in December.

The exercise comes amid heightened tensions between Saudi Arabia and its regional rival Iran as they back opposite sides of the wars in Syria and Yemen. Also on Thursday, state media reported Saudi Arabia is building a new airbase to protect the kingdom's airspace in Hafr al-Batin, where the military exercises took place.

Analysts on state-run Saudi TV said the military exercises are a show of force by the kingdom against its foes and send a strategic message to Iran and terrorist groups like al-Qaida and Daesh.

There has been no official announcement on how many troops were involved in the exercises. According to IHS Jane's Defense Weekly Middle East and Africa editor Jermey Binnie, the exercise appears to have been smaller in troop size than the "Bright Star 2000" held in Egypt in 1999, which involved 73,000 troops from 11 countries.