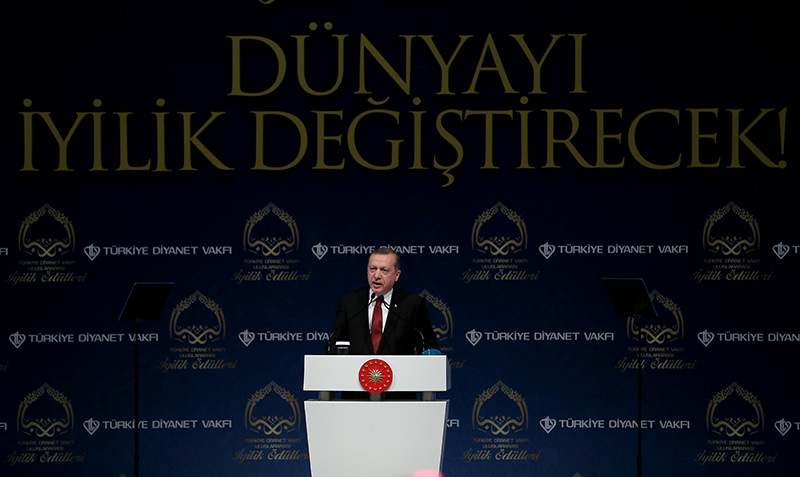 President Erdoğan said Ankara’s open-door policy for Syrian refugees will continue due to the responsibility coming from Islamic civilization, contrary to Western hypocrisy

Speaking at a Religious Affairs Directorate Foundation meeting, Erdoğan said Turkey has become a source of inspiration and the government has to stand firm in the days of political, social, cultural and ethical losses.

Asserting that the government has not asked how many Syrian refugees will come and did not behave hypocritically like Western countries, he said: "There are 3 million [refugees] here now. We have to accept the people escaping bombs with an open-door policy from now on. The sons of this civilization have to do so.

"If we opened the borders, this is because of the responsibility our civilization has put on our soldiers."

He said that he will struggle against those who want to show Muslims as terrorists and a source of murder with their own values.

"DAESH and Boko Haram cannot exist where we are. The PKK, PYD [Democratic Union party] and [its armed People's Protection Units] YPG cannot have a presence."

He also said that the government cannot remain deaf to Gülenists' brainwashing of the youth that will "plant the seeds of hate" between parents and their children.

Several figures in a Washington-based Center for Strategic and International Studies (CSIS) report from February show that the level of involvement in easing the burden on Turkey and other neighboring countries is not enough and that Ankara needs much more help to meet the needs of the refugees who reside within its borders now comprising 2.9 percent of the total population, according to the report.

Considering the amount of funds Ankara has received from the Central Emergency Response Fund (CERF) between 2011 and 2015, the report says that Turkey has enjoyed much less aid than Iraq, Jordan and Lebanon even though it has more refugees.

The report says that $212.4 million worth of allocations have been spent over four years by the CERF, which is managed by the Office for the Coordination of Humanitarian Affairs (OCHA) and receives voluntary contributions year-round from United Nations member states and observers, regional governments, the private sector, foundations and individuals. Lebanon has received $39.5 million, Jordan $27.2 million and Iraq $20.6 million while Turkey has received $11.1 million.

The report also says that Turkey was not funded by the Regional Refugee and Resilience Plan (3RP) in 2015. The plan required $4.5 billion for 4.39 million refugees in Syria's surrounding countries and 1.3 million internally displaced persons (IDPs) in need. Turkey, however, received 37 percent of the aid and was left with a $624 million shortfall.

Since then, more than 250,000 people have been killed and more than 10 million displaced, according to the U.N.