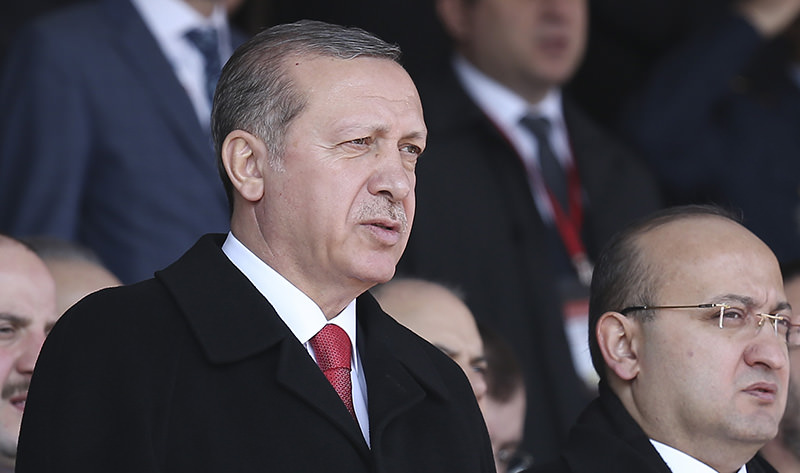 On Friday, President Recep Tayyip Erdoğan criticized Europe for its ambiguous stance towards terror incidents in Turkey during a speech to commemorate the 101st anniversary of the Gallipoli campaign, which took place in the Turkey's western province of Çanakkale.

Erdoğan criticized Belgium's decision to allow supporters of the PKK terrorist organization to pitch tents outside the Turkey-EU summit in Brussels. "They just took down the flag and posters [of PKK] today," Erdoğan said, and described Brussels' action as indecisive and insincere.

He also said that he expects more empathy from European countries, and that he will listen to their advice and that of other international institutions as long as they are fair.

Erdoğan said there is no reason that the bomb which exploded in Ankara won't explode in Brussels, where authorities have allowed the PKK to set up a tent and distribute propaganda material.

"Once again I call on countries which directly or indirectly support terrorist organizations. You nurse a viper in your bosom."

Warning Europe that its cities faced the kind of attacks Turkey has suffered in recent months, which were perpetrated by PKK-linked groups and DAESH, Erdoğan said, "Despite this clear reality, European countries are paying no attention, as if dancing in a minefield."

"We, as a nation, never fear or shy from battle, no matter whom or how powerful they [our enemies] are. ... No one can prevent us from writing a new epic, as long as we protect our solidarity and brotherhood," he stated, referring to the fight against the recent terror attacks in Turkey.

The president said Turkey faces a grave threat from terror. "All terrorist organizations are united against us. Sunday's Ankara attack is the latest example of this," he said.

In recent months Turkey has been subjected to a surge of terror that has hit both the capital of Ankara and the largest city Istanbul, targeting civilians and security officers.

The PKK, which is listed as a terrorist organization by the U.S. and the EU, broke an almost two-year-long ceasefire with the Turkish state, in July, 2015, and resumed its armed campaign in which civilians were also targeted. In the clashes, the PKK's losses are estimated at around 4,000 militants.

Despite this considerable loss, the terrorist organization seems intent on escalating violence across the country, according to the latest statements by its leaders.

Speaking to British daily The Times four days before the deadly car bomb that killed 35 civilians in the Turkish capital Ankara, Cemil Bayık, a leader of the PKK who are culpable for the attack, said that their main aim is to topple President Erdoğan and the Justice and Development (AK) Party government.

Bayık described their current activities in Turkey, which have started to resemble tactics used by extremist groups in Syria and Iraq through targeting civilians with suicide bombings, as a "life and death" fight.