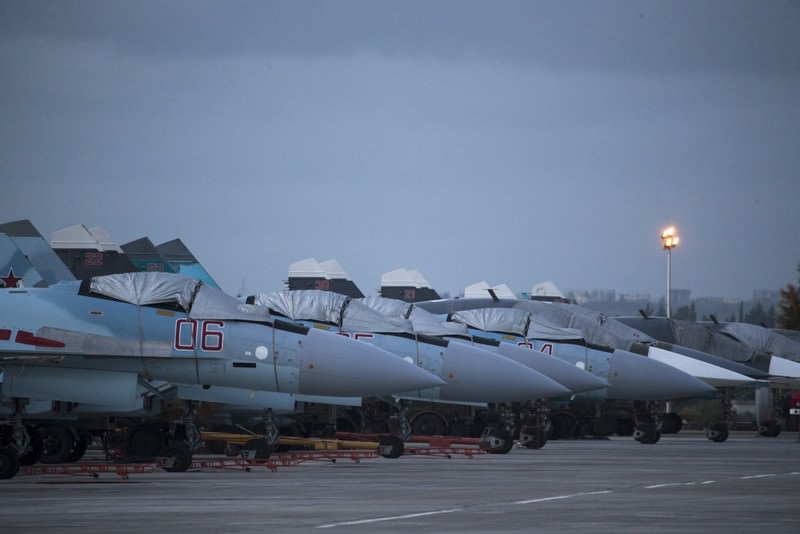 Although the Assad regime's main ally Russia has previously announced that it will reduce its military presence in Syria, diplomatic sources indicate that the majority of Russian bombers are still deployed in the war-torn country

Despite Russia's recent decision to reduce military assets in Syria, 24 high-tech bombing aircraft are still on deployment in the war-torn country.

According to western diplomatic sources, only 20 bombing aircraft and one personnel-transport plane have returned to Russia from Syria since Moscow's partial withdrawal announcement on March 13.

The advanced-technology Sukhoi Su-30, Su-34 and Su-35 aircraft, all of which are currently stationed at Latakia's Khmeimim Airbase, are used to carry out bombing runs capable of causing mass destruction.

The ongoing presence of 12 Russian Sukhoi Su-24 bombers in Syria means Russia has maintained its ability to carry out heavy bombardments across wide swathes of territory.

On Tuesday, Sergey Rudskoy, chief of the Russian General Staff's main operations department, said the Russian airforce may begin targeting groups that fail to comply with a cessation-of-hostilities agreement that went into effect in Syria late last month.

According to Rudskoy, Russian military officials proposed this to their U.S. counterparts at a March 18 meeting in Oman, but the latter declined to consider their plan.

Since September of last year, Russia has bolstered its military assets in the coastal areas of Syria, generally relying on a Caspian Sea-Iran-Iraq air corridor. At a time when international criticism of the Russian military presence in Syria was mounting, Moscow on Sep. 30 began extensive air operations in Syria claiming the goal was "fighting terrorism."

Russia currently maintains Su-24s, Su-25s and Su-30s at the Khmeimim Airbase, which is controlled by Syria's Assad regime, along with Mi-24 attack helicopters and unmanned aerial vehicles.

Also, after the downing of a Russian aircraft that violated Turkish airspace near the Syrian border on Nov. 24, Russia began deploying S-400 air defense systems to Syria.

Russian warships, meanwhile, remain docked in Latakia's Port of Tartus, which is also controlled by the Assad regime.

Critics say that Moscow has used both the Khmeimim Airbase and its naval assets to strike positions held by moderate opposition groups.

On Feb. 27, Russia scaled down its air campaign in Syria after the cessation-of-hostilities agreement came into effect.

Recently on March 13, Russia announced the reduction of forces deployed in the country, even though the announcement was met with skepticism from both moderate Syrian opposition groups and a number of international organizations.

Kremlin spokesman Dmitry Peskov has said the Russian military presence at both the Khmeimim Airbase and the Port of Tartus will be maintained.

Col. Steve Warren, chief spokesman for the U.S.-led coalition against the DAESH terrorist group, asserted on March 16 that only "a small handful" of Russian aircraft had left Syria after Moscow's announcement of a partial withdrawal.