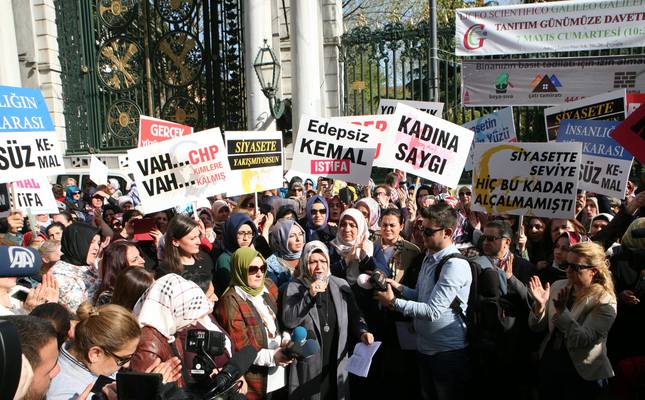 CHP Chairman Kılıçdaroğlu's sexist remark caused outrage in politics and with members of the public, while some women's associations have not denounced his insult of Family and social policies Minister Ramazanoğlu due to their political stances

Political figures and women's associations Wednesday called Republican People's Party (CHP) Chairman Kemal Kılıçdaroğlu's comment in a party meeting on Tuesday a direct insult of Family and Social Policies Minister Sema Ramazanoğlu. Kılıçdaroğlu defended his remarks with a press release on the same day. Kılıçdaroğlu lashed out at Ramazanoğlu over a recent student sexual abuse scandal by a suspected pedophile who once briefly volunteered for the Ensar Foundation in the central province of Karaman. Kılıçdaroğlu said that Ramazanoğlu "knelt before someone" in his address to fellow party members.

"No one talks about it, neither the governor nor chiefs. The minister of family does not talk because she knelt before someone," Kılıçdaroğlu said to applause from party members. Ramazanoğlu had said that the reputation of the nonprofit organization, which has a long history of service such as scholarships and free dormitories for students for more than three decades, should not be harmed by the crime. In an address to village headmen in a meeting at the Presidential Palace, President Recep Tayyip Erdoğan yesterday harshly criticized Kılıçdaroğlu's "sexist" remarks. He said that the "pervert" responsible for the abuse in Karaman is currently in prison and being held accountable for what he did, and asked: "What will we do to these political perverts?" in a reference to Kılıçdaroğlu's insult.

"Every word from this person [Kılıçdaroğlu] is unnecessary, a waste," Erdoğan said, adding that Kılıçdaroğlu's remarks raised the level of immorality and ugliness in politics.

Prime Minister Ahmet Davutoğlu said Kılıçdaroğlu "proved how rude he was once again," and that he would be remembered with those words in politics and his legacy would be "nothing but insults."

"The next generations will not want to remember even his existence. He did nothing but utter rude words and insults during his time as CHP leader. I expect the women of the CHP to react to this rudeness," Davutoğlu tweeted. He also stopped following Kılıçdaroğlu on Twitter.

Kılıçdaroğlu, who has defended his statement, said that it is wrong to classify a minister on gender. "The identity or gender of people is not important if one has a ministerial seat. These children [in Karaman] are our future. Does that foundation have the authority to open dormitories? They should first respond this question. … I stand behind my word," she said.

Ramazanoğlu strongly condemned Kılıçdaroğlu in a press release for his "unjust" and "unlawful" statements on behalf of all women and mothers: "I believe these unfortunate remarks annoyed all women in the CHP cadre, and also his wife." Calling on Kılıçdaroğlu to apologize to all women, Ramazanoğlu said that his statement was direct abuse and a violation of human rights.

Among those from the CHP who criticized Kılıçdaroğlu, Istanbul deputy Mehmet Bekaroğlu said on his Twitter account that Kılıçdaroğlu should have never made such remarks.

"In my opinion, it went beyond its purpose, I wish he had never said such a thing, but it does not mean that neither he nor the CHP deserve to be attacked," Bekaroğlu was quoted as saying.

Fatma Şahin, the first female deputy from the southwestern province of Gaziantep, and the city's mayor, said that Kılıçdaroğlu targeted all women with his statement, not only Ramazanoğlu, and he must apologize to all Turkish women, including those in the CHP.

Jülide Sarıeroğlu, a female AK Party lawmaker, said female deputies expect Kılıçdaroğlu to apologize and would take "legal action" if he does not. This is not the first time Kılıçdaroğlu has used derogatory language against Ramazanoğlu. Speaking out on sexual abuse cases, Kılıçdaroğlu said last week that the Ramazanoğlu's "motherhood should be questioned if she does not defend the children."

In a press release, female CHP deputies supported Kılıçdaroğlu, claiming that what he said means protect and support. CHP Eskişehir deputy Gaye Usluer said: "These words mean to protect. … The family minister knelt before Ensar Foundation. Did she kneel before? Yes, she did by protecting the foundation."

A columnist and scriptwriter, Gülse Birsel, who is known for leftist remarks, said in her column that to be a bully, immodest and rude has no sympathy or popularity at all.

"Even though we harshly criticized [Ramazanoğlu's] stance on the Ensar Foundation issue, the 'kneel before someone' remark should not be used," Birsel wrote.

Many women's organizations have not condemned Kılıçdaroğlu's remark.

Apart from some women's rights organizations, many women's rights groups are yet to openly condemn Kılıçdaroğlu's remark. When Daily Sabah asked those organizations how they evaluate the CHP leader's sexist remarks, they said it is a political issue.

The Istanbul Baro Women Rights Center head, Hale Akgün, said in response to Daily Sabah that it is a political issue and that is why she does not want to respond.

Women Candidate Support and Education Organization (KA-DER), an organization founded to support female deputy candidates, said that the discourse in politics is getting tougher by the day and all political parties should revise their procedures to promote female politicians.

"Men and women in Turkey conduct politics with a manly discourse. This is a harsh, offensive, othering and insulting discourse. We, as society, are exposed to politicians' violence. Women in politics try to accept this discourse since their numbers are not enough," the organization said.The head of the Federation of Women's Associations, Canan Güllü, evaluated Kılıçdaroğlu's remarks in a press release. The press release issued by the federation does not mention Kılıçdaroğlu's remark, instead highlighting the political debate resulting from them.

Some question the women's associations' silence as being politically motivated and pointed to how the same organizations were outraged when former AK Party Deputy Prime Minister Bülent Arınç remarked "You, as a woman, be quiet!" to a Peoples' Democratic Party (HDP) deputy in 2015.

Among the women's associations that criticized Kılıçdaroğlu, Sare Aydın, the president of the Women and Democracy Association (KADEM), said that Kılıçdaroğlu exhibited "immoral behavior" and should apologize, not just to Ramazanoğlu, but "to all women in Turkey."

"His remarks do not fit in any part of politics or social morals in Turkey. Politics certainly involves criticism, but you cannot attack a woman, a minister, with such immoral, dirty words. The CHP leader complains of violence against women, of denial of rights to women, but contradicts his party," she said.

The head of the Woman Movement Association, Professor Dr. Elif Loğoğlu, described Kılıçdaroğlu's remarks as humiliating, and said: "We must protect our children in the best [way], but, insulting someone, especially a woman, while trying to protect children is defamatory.
RELATED TOPICS