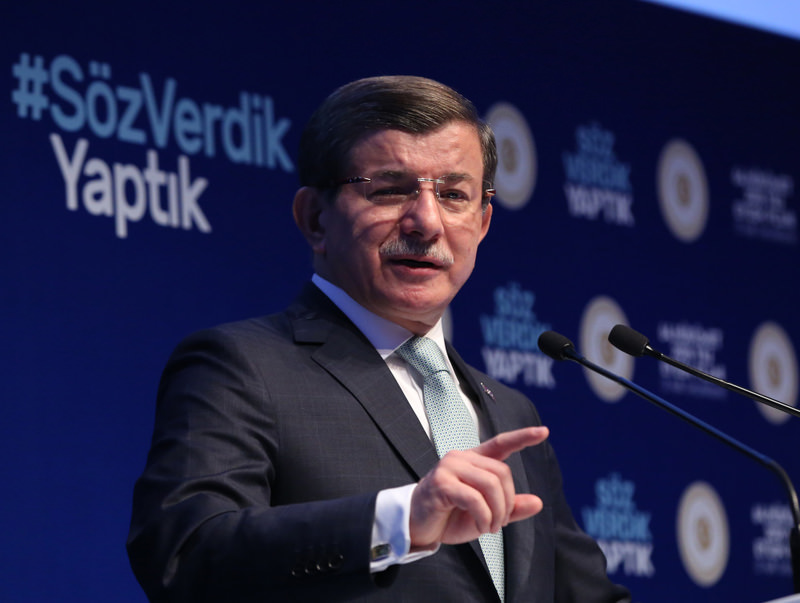 Having fulfilled all election promises made prior to the Nov. 1 elections, Prime Minister Davutoğlu said the reform packages, which are interrupted with the regulative works on visa-free travel deal with the EU are also about to be completed

Prime minister and Justice and Development Party (AK Party) chairman, Ahmet Davutoğlu, announced Friday that the government accomplished all election promises made during the Nov. 1 general election campaign. Besides the election promises, the reform packages announced by the AK Party after the elections are also about to be completed. "We accomplished 70 percent of reforms that were planned to be completed in three months," he said.

Speaking at the 2016 action plan meeting in Istanbul on Friday, Davutoğlu said: "As of today, thanks to Allah, I am standing before you having fulfilled each election promise we made in the Nov. 1 elections."

The party carried out its promises, including making subcontracted workers civil servants as well as raising the monthly minimum wage to TL 1,300 ($457) from TL 1,000 per month.

Davutoğlu said that reforms made in the development sector and public order has been maintained simultaneously. "We are marching toward our European Union targets. Turkey will not step back from its targets of growth, development, democracy and state of law despite all negative efforts," he said.

Davutoğlu also said that some reforms would have been completed earlier, but the government had to accomplish some regulations regarding the visa-free travel deal with the European Union first. He said visa-free travel to Europe will start in June and he will announce it personally.

Saying that one of the crucial conditions for reaching the high-income group is to increase productivity, Davutoğlu discussed the government's goals to increase productivity in the labor sector as well as capitalize on the promises and reforms made by the Justice and Development Party (AK Party). He said that to accomplish this, a well-planned education reform is one of the most important preconditions.

Stressing the importance of productivity in education and the labor force within the framework of the 2016 Action Plan, Davutoğlu said that important steps are being taken in order to increase the quality of education and qualified employment opportunities. The government is working to decrease the unemployment rate among young people and simultaneously increase the number of females in the workforce along with bringing flexibility to Turkey's labor force market. He said that apprentice training will be placed under the scope of obligatory education and women would be granted more rights regarding maternity leave, opening the door for them to take a more active role in the labor force.

Stressing that the promised reforms, which include maternity benefits for working mothers that provides a TL 300 ($105) maternity benefit for the first child, TL 400 for the second and TL 600 for the third - has already been put into effect, Davutoğlu said: "In order to facilitate the careers of 850,000 female white-collar workers we have decided to evaluate the terms of their maternity leave within the scope of their length of service to the relevant companies and have begun implementing these reforms, offering parents the right to work part-time until their children reach school age."

This new regulation has paved the wave for Turkey's female workforce to utilize maternity leave as well as the part-time work period. He also said that blue- and white-collar working women would have the right to receive full-time salaries after working part-time for 60 days after birthing their first child, 120 after the second and 180 days after the third.

With regard to blue-collar working women who work part-time, their premiums and wages during the period they do not work will be compensated by the state over the minimum wage, and those who adopt children could also benefit from these rights.

With these security and flexibility regulations, women working as seasonal agricultural employment and home-based working women will be involved in the scope of temporary province-business and their social security protocol will be expanded.

Stressing that during the election campaign he went over the whole process from birth to retirement step-by-step in order to explain the promises to citizens better, Davutoğlu said that in the future there would be no citizens unreached.

Davutoğlu also talked about the reforms targeting youth employment and welfare. Under the scope of the reforms carried out within last three months, Davutoğlu said the government finances income of those who either started their first job or attended training programs for one year. He added that this financial support, corresponding to the minimum wage, has been put into effect and is expected to support 200,000 young people. Davutoğlu also said for youth who study at either technical highs chools or universities, a grant corresponding to one-third of the minimum wage has been provided as promised. He said that the government launches its financial support for general health insurance expenses of these young people who have not passed two years since graduation, regardless of income. In addition, in order to enable youth to access information easily, the government has expanded free access to the Internet. Davutoğlu said the government eliminated the procedural barriers on university students to take up part-time jobs.

Davutoğlu also said that the government started providing students willing to start a business with grants of TL 50,000 ($17, 560) with no pay-back requirement, adding that 731 enterprises have already been given grants worth of TL8.7 million. Davutoğlu also said that young people who attempt to develop a project have been given credit of up to TL100,000, 85 percent of which bail opportunity is given. He also said founders of startups will be exempted from revenue tax up to annual income of up to TL 75,000 for three years.

Davutoğlu also touched on the reforms to be implemented such as the Young Thesis Program, which gives grants for project-based art and sports activities.

He said that grants of up to TL 30,000 will be put into effect next week to be given to farmers under the age of 40.

Davurtoğlu reported the necessary regulation for teleworking was sent to Parliament to eliminate the informal economic activity arising from jobs that do not require continuous presence at the workplace.

Following the AK Party government fulfilling its election promise regarding subcontractors getting hired in the public sector, Davutoğlu said these workers will also benefit from the same raises and health and social rights as white-collar workers. He reiterated that the government implements every promise it made in accordance with public demands and the needs of the country to develop further. The site reformlar.gov.tr also provides information regarding accomplished reforms and related ongoing work.
Last Update: Apr 09, 2016 10:49 am
RELATED TOPICS