Sectarianism, racism the root of all issues, President Erdoğan says 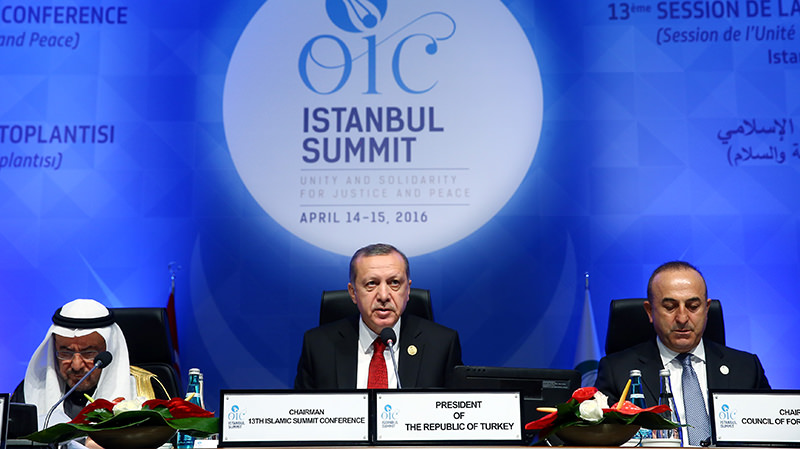 Sectarianism and racism lie at the base of all issues, President Recep Tayyip Erdoğan has said on Thursday at the 13th OIC Islamic Summit Conference held in Istanbul.

Speaking at the opening ceremony of the OIC summit, Erdoğan said that all Muslims must overcome sectarian temptations instigating hostility.

"My religion is neither Sunni nor Shi'ite, I am a Muslim" he said.

Erdoğan also said that terrorist organizations who attack and kill innocent people under the name of Islam and Muslims cannot be representatives of a sacred religion.

"Because ours is a religion of peace" he added.

Saying that terror is the one of the gravest problems facing the Islamic world, Erdoğan decried the devastation of Afghanistan, in which hundreds of thousands Muslims were killed and millions of them were mistreated by al-Qaeda.

"Now Daesh, which controls areas in Iraq and Syria and tries to get control of Libya, serves the same dirty plans. We see Boko Haram and Al Shabaab, which conduct terror attacks in Africa, in the same category. Apart from a few attacks for show, all these terror organizations oppress and harm all Muslims," Erdoğan stressed.

Erdoğan underscored that Muslims should be united and urged them to strengthen dialogue.

Touching upon the latest Nuclear Summit in Washington, he expressed his dismay about the West's one-sided approach by turning a deaf ear to attacks in Istanbul, Ankara and Lahore and focusing solely on Paris and Brussels.

The president also touched on the lack of Muslim representation at the United Nations Security Council (UNSC) and said that the system needs to be reformed.

"The injustice regarding the lack of a Muslim nation represented at global decision-making mechanisms is a source of discomfort" he said, and added that the world no longer has World War I conditions.