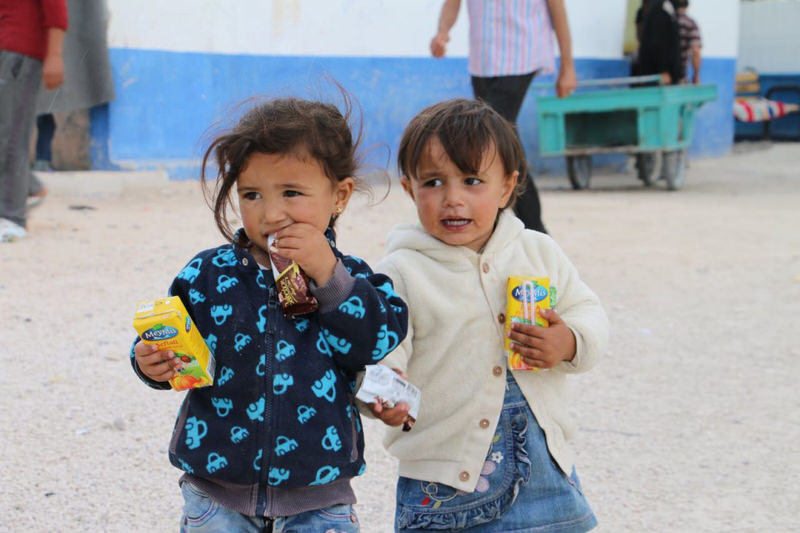 Syrian children from Tal Abyad fled from PYD atrocities and took shelter in Turkey.
by Erkam Çoban Apr 19, 2016 12:00 am

Providing a first-hand account of the PYD's efforts to cleanse northern Syria of all ethnic or religious groups that oppose it, Arabs and Turkmens who fled the group spoke of violence, coercion and demolition of homes

Thousands of Turkmens and Arabs who escaped from the PKK Syrian affiliate Democratic Union Party's (PYD) armed People's Protection Units (YPG) in the northern Syrian town of Tal Abyad accused the organization of committing brutal offenses, including forcing people to migrate after confiscating their property and ethnic cleansing. Speaking to the Sabah daily after taking shelter in Turkey among nearly 60,000 refugees in the aftermath of the YPG capturing the town, Arab refugees claimed the YPG perpetrates atrocities with the pretext of fighting DAESH.

Youssef al-Mohammed, 43, and Ahmad al-Hassan, 50, who currently live in the Akçakale district of southeastern Şanlıurfa province, said they previously never faced problems with Kurds living in the area from Rasulayn to Tal Abyad before Kurds from different regions came to the town with the YPG and tried to erect a PYD flag there. "First, the PYD started to fight with us. DAESH had followed them. The PYD wanted to remove those who fight against the organization. Then DAESH took Tal Abyad from us [Free Syrian Army]. After a certain time, pretending to fight against the PYD, DAESH sold Tal Abyad to the group without firing a single bullet."

Saying that the PYD demolished houses of Arabs and Turkmens in Tal Abyad with the pretext of dismantling DAESH explosives, refugees say that the organization attempted to destroy houses with bulldozers while they were inside and they had to escape to Turkey.

"When we ask 'Why are you doing all this, which was not even done by DAESH? What have we done to you?' they replied: 'This is Kurdistan and you have no place here.' When we ask where we should go, they responded: 'Go to hell.' "

Saying that they were told that Kurds from Kobani were resettled by the PYD in their houses, refugees also claimed the PYD and the regime of Bashar Assad cooperate by delivering young people of military age to the regime's forces and even kill some of them.

"Turkey sheltered us after escaping the war. We cannot thank enough the Turkish government President Recep Tayyip Erdoğan, the officials who look after us and the Turkish brothers who have protected us. Only Turkey accepted us. If someday this war ends and we return to our country, we will always tell that we have no brothers other than Turks."

A report published by the Syrian Network for Human Rights (SNHR) in January said the PYD has committed multiple human rights violations since the withdrawal of government forces in 2012, including ethnic cleansing and abusing women, children and media workers.

According to the report, the PYD sought to ethnically cleanse towns under its control that were mostly inhabited by Arabs. Three reported massacres that took place in four villages in al-Hasakah resulted in the deaths of 91 civilians, including 17 children and seven women, the report said.

Amnesty International released a report in October 2015 that cites similar accusations against the YPG concerning non-Kurdish inhabitants in areas under PYD control in northern Syria. The report said that some YPG actions amount to war crimes and that non-Kurdish, mostly Turkmen and Arab, inhabitants of villages in the de facto autonomous Kurdish administration were forced out of their homes.

Amnesty quotes Ciwan Ibrahim, the head of the Kurdish internal security force Asayish, as saying that there had been forced displacements, but that they were "isolated incidents" and that civilians had been moved "for their own safety." However, the report says that the findings show the forced displacement mostly concerns non-Kurdish villages captured by the YPG.

Reports in November 2015 indicated that Syrian Christian communities in northern Syria have accused the PYD of seizing private property belonging to their community, unlawful taxation and forced military recruitment. Sixteen Christian minority communities in the northeastern Syrian governorate of al-Hasakah, located along the Turkish border, signed a joint statement condemning the PYD for seizing their property after the region was captured from DAESH terrorists this summer. In a statement published in English by the Assyrian International News Agency (AINA) on Nov. 2, a Christian organization mainly of local Assyrian and Armenian groups in the Qamishli district of al-Hasakah, called on the PYD to uphold human rights and abandon regulations that have resulted in the confiscation of property belonging to Christians who fled the area.
RELATED TOPICS