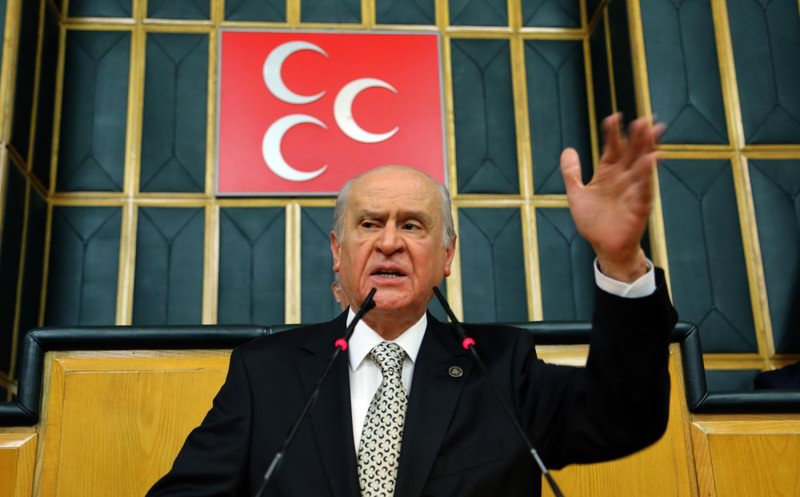 by Daily Sabah Apr 20, 2016 12:00 am
Nationalist Movement Party (MHP) Chairman Devlet Bahçeli said Tuesday that his party cannot applaud or accept as an act of freedom of speech a recent video broadcast on a German national TV station that contained a satirical poem with insults and profanity directed at President Recep Tayyip Erdoğan. In a speech during the MHP's parliamentary group meeting, Bahçeli described the video as a groveling attack and said: "No person can accept being so insulted, and no nation can be belittled or mocked. We will not stand back while our rivals are insulted by foreigners." The video has garnered severe criticism from social media and the public. Prime Minister Ahmet Davutoğlu and German Chancellor Angela Merkel also discussed the video during a phone call on April 3.

Concerning intra-party debates within the MHP, Bahçeli promised to remove his opponents, implying acceptance of allegations that some are backed by the Gülen Movement. "We will sweep those who confront us," he said.

Speaking to reporters after his address in Parliament, Bahçeli also criticized Meral Akşener's latest remarks in which she accused him of having links with Gülen Movement and said that such remarks are impertinent.

An MHP committee, authorized by a court decision on April 8, announced that an extraordinary congress will be held on May 15. The MHP administration is expected to appeal the decision by the Supreme Court of Appeals. Dissidents in the MHP have been pushing for an extraordinary congress following its poor performance in the Nov. 1 elections. The intra-party opposition is looking to oust Bahçeli as chairman.

On the topic of the European Parliament (EP) progress report for Turkey in 2015 released on Thursday, Bahçeli said the report does not respect Turkey's values and described the demand for using proportional force against the PKK as "impudent."

He said: "Will those who pat [terrorists] on the back teach us humanity?" and recalled that the report demands that the PKK be removed from the EU list of terrorist organizations.

The report by EP Turkey Rapporteur Kati Piri is expected to overshadow EU-Turkey relations, which were drawing close of late. EU Minister and Chief Negotiator Volkan Bozkır said on Thursday that the report is unacceptable and will be returned unopened. In an expression of disapproval for the draft EP report, which refers to the events of 1915 as "genocide," deputies in Parliament penned a letter to Piri.
Last Update: Apr 20, 2016 3:37 pm
RELATED TOPICS