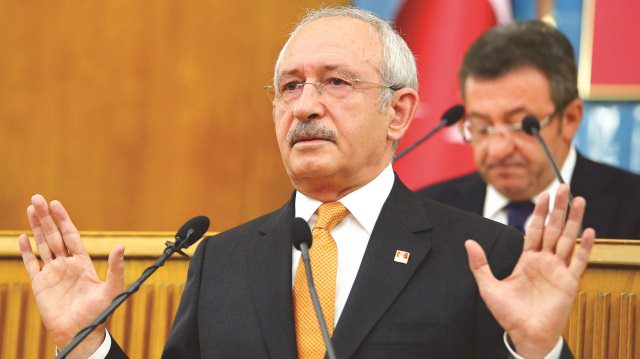 With discussions on the lifting of deputies' parliamentary immunity still on the political agenda, intra-party disputes within the main opposition Republican People's Party (CHP) continue as party Chairman Kemal Kılıçdaroğlu on Thursday criticized party members for sending mixed signals on immunity discussions. The chairman said that party deputies are "affecting his strategy." According to parliamentary sources, Kılıçdaroğlu touched on the intra-party discussions on the lifting of immunities during the CHP's closed-group meeting in Parliament and told deputies that "stating different views is not appropriate. You having attitudes against it is leading us to a difficult situation where the public no longer trusts us."

The CHP slipped into dispute following Kılıçdaroğlu's statements made on CNN Turk that the CHP would support the Justice and Development Party's (AK Party) proposed amendment to lift parliamentary immunities. CHP figures such as Deputy Chairman Sezgin Tanrıkulu, Fikri Sağlar and Eren Erdem had announced their opposition to the amendment after Kılıçdaroğlu expressed his support. The CHP chairman addressed party members and advised them on their position regarding the immunity discussions. While sources say 25 CHP deputies expressed their opinions on the topic, one further said: "Saying yes to the motion is not right. We, as opposition deputies, will be arrested in a country where there is no independent justice system once our immunities are lifted." Additionally, it has been claimed that some CHP deputies told Kılıçdaroğlu that he had announced his decision too early. Responding to the criticism, Kılıçdaroğlu announced that he has a strategy on the immunities.

"I have a strategy. I am trying to manage the procedure accordingly to that strategy. However, the statements you make are unveiling this strategy," Kılıçdaroğlu said. He further said that CHP deputies making statements as if voting were tomorrow at Parliament is "mistaken." Sources also said that Kılıçdaroğlu warned his party members about placing the CHP in a difficult position and losing the public's trust with their statements. Although Kılıçdaroğlu's strategy was not fully described at the party's meeting, sources claim that it has two parts, with one to alter the AK Party's motion in accordance with the CHP's position and the second to target Prime Minister Ahmet Davutoğlu and try to establish counter-arguments against him.

There have been 170 complaints filed against the CHP, and sources close to Parliament said there have been many calls from CHP deputies to the Constitutional Committee to find out if they have files against them. Sources say that there are files on 51 CHP deputies. With the files waiting at the Justice Ministry and the Prime Ministry, the total number of complaints is expected to reach 550.
Last Update: Apr 23, 2016 3:30 am
RELATED TOPICS