No other country fights against Daesh terror group like Turkey, Erdoğan says 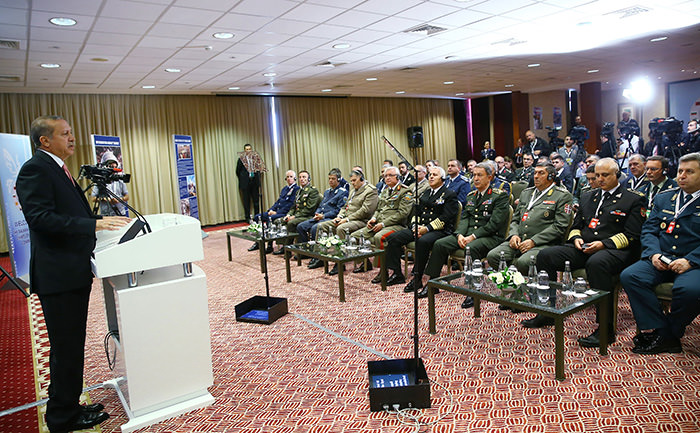 President Recep Tayyip Erdoğan said on Wednesday that no other country in the world has fought the Daesh terrorist group like Turkey has.

Speaking at a conference in Istanbul attended by chiefs of defense from several Balkan countries, Erdoğan said: "While countries [taking part in the anti-Daesh coalition] didn't take any steps, didn't conduct the necessary intelligence-sharing, Turkey was expected to do everything."

"In fact, during this process, Turkey battled many unfair, ruthless and unfounded accusations," Erdoğan said. "The portrayal of Turkey as a country that helps Daesh is –excuse me if this will sound harsh – despicable."

Turkey has been under indiscriminate rocket attacks from neighboring Syria since mid-January. In the province of Kilis alone, the local governor has confirmed that 20 people have been killed and almost 70 others wounded by rockets that have fallen inside Turkey.

"No other country in the world is fighting Daesh in the same way as Turkey," he said. "No country has [experienced as many losses as] Turkey in the fight against Daesh."

Having taken in 3 million refugees from Syria and Iraq and spent $10 billion to meet their needs since the beginning of the Syrian civil war, Turkey never asked for money from the international community, according to Erdoğan.

"The consequences and repercussions of the Syrian crisis are no longer a local or a regional problem, but have turned into a global threat," he added. "At this point, Turkey and the Balkan countries are under a heavy load and facing serious costs."

Last week, the European Commission recommended granting visa-free travel to the EU's Schengen zone to Turkish citizens as part of a deal that would see Turkey stem the refugee flow to Europe in exchange for speeding up the country's EU accession negotiations.

The deal also included a 6 billion euro ($6.8 billion) aid package to help Ankara care for the millions of refugees in the country.

However, among five remaining benchmarks Turkey has yet to address in order to have the visa requirement lifted, the EU requires a change in Ankara's legislation on terrorism, which is a demand that Erdoğan has criticized and rejected.

"We will go our way; you go yours," he said last Friday in an address at an inauguration ceremony in Istanbul. "The EU is telling us to change our law on combatting terrorism. [They] are allowing terrorists to raise tents and then [they] come with requirements. "

Erdoğan was referring to a controversial tent erected in March by PKK supporters near the European Council building in Brussels. The PKK is considered a terrorist organization by the EU, the U.S. and Turkey.