Bahçeli: MHP will fight Gülen Movement with all its means 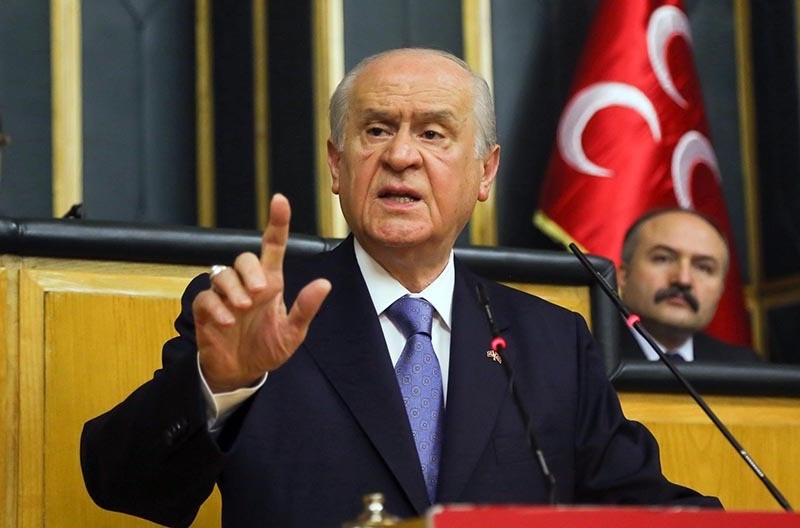 As uncertainty continues as to whether an MHP emergency convention will be held, Chairman Bahçeli said the party will continue their resolute fight against the Gülen Movement within the framework of party by-laws and legal terms

The Nationalist Movement Party (MHP) will make all necessary moves within the framework of party bylaws and legal terms to tackle the alleged Gülenist threat, MHP Chairman Devlet Bahçeli asserted at a parliamentary group meeting Tuesday.Claiming that all MHP foes joined the Gülen Movement in gathering a "pirate convention," Bahçeli alleged that the PKK, Revolutionary People's Liberation Party Front (DHKP-C), Cumhuriyet daily and others are in attempts to seize the chairmanship of the MHP.

"When the time is ripe, all necessary moves to deal with this scheme fueled from overseas will be made within the framework of the party laws and bylaws," he said.

Bahçeli also said that attempts to organize an emergency convention on Sunday despite a court order and protests at the scene were a small copy of the Gezi Park protests and those responsible will never be forgiven.

"In the incidents [on Sunday], which were a small copy of the Gezi protests, some of [the dissidents] were caught in the fences. Some pretended to be public storytellers while some posed in front of anti-riot water cannon vehicles," Bahçeli said, adding that those responsible for the images will never be forgiven.

"It is not a race for the chairmanship. What happened in Ankara on Sunday was the utmost disgrace and the peak of shame. Those who are in attempts to use the nationalist movement in provocations like Gezi dropped a brick," he claimed.

Dissident members of the opposition MHP gathered in Ankara on Sunday morning in the wake of a court order to stop the emergency convention to oust Bahçeli as chairman.

Bahçeli, who has led the party for 19 years, said in January that the next party convention will take place in 2018 as planned, meaning he would be in charge until then.

Police have prevented dissident MHP members from holding a disputed emergency convention at the Grand Anadolu Hotel in Ankara.

The entrance of the hotel was closed off by police barricades in line reportedly with instructions from the Ankara Governorate.

Hundreds of party members, who were not allowed to enter the hotel, stood in front of a training center belonging to the Customs and Trade Ministry and chanted slogans against the MHP's head office.

On May 13 a court accepted MHP dissidents' appeal against the stay of execution from another court on the emergency convention.

On late Friday a court in Ankara ruled that Friday's ruling for the stay of execution was valid and dissidents could not hold an emergency convention on Sunday.

Bolstering the position of the party leadership, the Ankara Governorship said in a statement that under the court rulings received by the office, no MHP convention will be allowed.

"Talking about the dangers of a presidential system, stressing its drawbacks [and] informing people are one thing, making reference to a bloody struggle is another," Bahçeli said, adding that it is careless and irresponsible to address fighting while there is nothing concrete about a presidential system yet.

The Ankara Public Prosecutor's Office filed an investigation into Kılıçdaroğlu's comments about a presidential system leading to bloodshed, comments which have drawn strong reactions from politicians, claiming he is inciting people to crime and rioting.

The investigation concerns the potential violation of Article 214 of the Turkish Penal Code on the incitement to commit crime. The investigation is into Kılıçdaroğlu's criticism of efforts to include a presidential system in a new constitution, in which he said: "Such a system cannot be realized without the shedding of blood."
Last Update: May 18, 2016 7:58 am
RELATED TOPICS