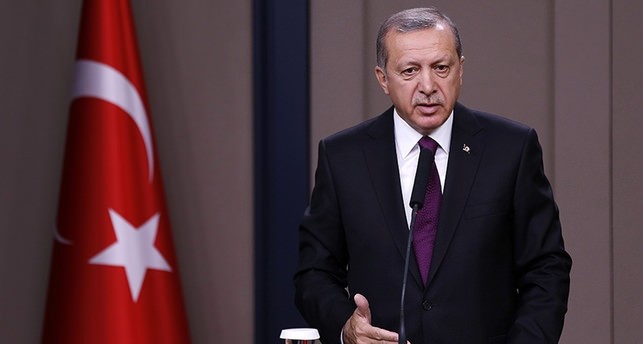 President Recep Tayyip Erdoğan has praised the consensus among Turkey's ruling Justice and Development Party (AK Party) members regarding the candidate to be their new chairman.

"It appears that the AK Party is going to have one candidate at the extraordinary congress [to be held on Sunday.] This shows a consensus of 81 to 82 percent," Erdoğan said, adding that the new prime minister "of our party" would be known by Sunday evening.

"I can say our party because I was the founding chairman," Erdoğan said.

As for the appointment of a new prime minister, Erdoğan said he did not want to delay the process following Ahmet Davutoğlu's resignation, "which I assume he will submit the very same day".

"My plan is then to appoint the new prime minister right away and give him the chance to form his Cabinet as soon as possible," he said.

The AK Party earlier on Thursday announced its candidate to assume the chairmanship -- and likely, the country's premiership: Minister of Transport, Maritime and Communications Binalı Yıldırım.

AK Party Deputy Chairman and spokesman Ömer Çelik made the announcement in Ankara, hailing "our esteemed friend" Yıldırım and saying he had been chosen by a "huge consensus" within the party.

Earlier this month, Davutoğlu announced he would not stand again for the AK Party chairmanship, a role he currently holds alongside the premiership, meaning he will also be replaced as prime minister.

The announcement came hours after the party's highest decision-making body, the Central Decision and Executive Board (MKYK), gathered at around 11.00 a.m. local time (0800GMT).

The chosen candidate is to be elected in an extraordinary congress on Sunday. He is expected to become the country's next prime minister.