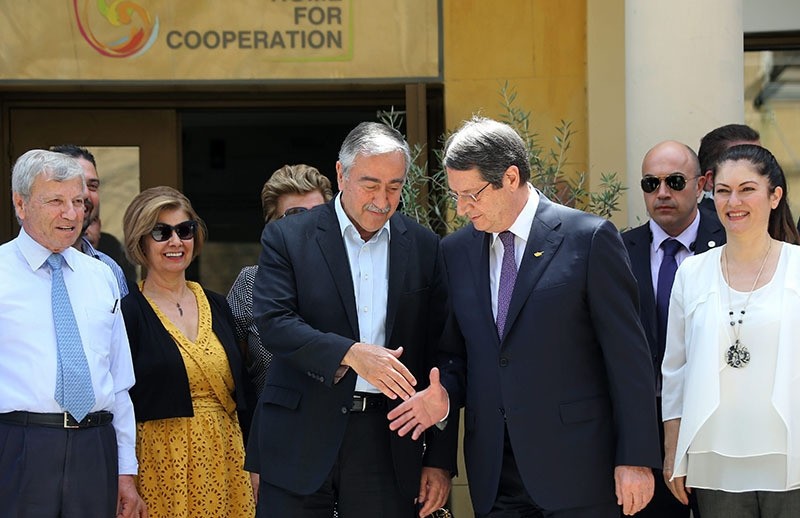 Both leaders met in the UN-administered buffer zone in Nicosia for International Children's Day, generally celebrated on June 1.

"The solution for the Cyprus issue will be [found] at the resumption of negotiations," said Akıncı after a meeting with Greek Cypriot leader Nicos Anastasiades.

The announcement came after the UN-brokered talks had been suspended when Anastasiades, canceled a meeting with Akıncı and cut short a visit to Turkey over a perceived protocol breach at a UN summit in Istanbul, which took place in May.

Anastasiades, who was in Turkey for the World Humanitarian Summit on May 23, also refused to attend an official dinner hosted by President Recep Tayyip Erdoğan after learning that Akinci was also invited.

Akıncı had said he had found the Greek Cypriot leader's reaction to his meeting with UN Secretary-General Ban Ki-moon while he was in Istanbul for the World Humanitarian Summit, "unreasonable".

"Hope he would review his position. Suspending peace negotiations cannot be accepted at all," he had said.

On Thursday, Akıncı said, the two leaders hoped to end the negotiation process successfully at the end of the year.

"Cyprus is our common country. We should offer you an opportunity to be creative under conditions of peace," said Anastasiades to the children who attended the event.

Reunification talks between the Greek Cypriot and Turkish Cypriot communities on the island resumed in May 2015.

Previous negotiations had stalled in October 2014 due to a dispute over underwater gas exploration.