Experts: Turkish-Germans to experience difficulties from 1915 resolution in Bundestag 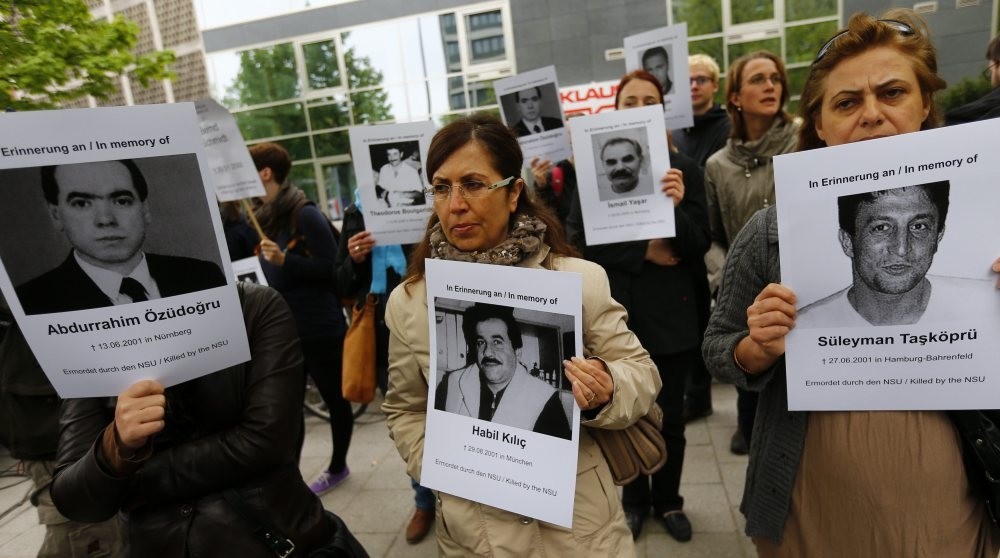 Protesters hold pictures of victims who were killed by the neo-Nazi group National Socialist Underground (NSU).
by Merve Aydoğan Jun 07, 2016 12:00 am

Tensions have increased between Turkey and Germany following the recent adoption in the German Bundestag of a symbolic resolution recognizing the 1915 events as the Armenian genocide. Experts of Turkish-German relations have said that the resolution has already begun to stir a distrustful sentiment among Turkish-Germans of the German government. The head of the Europe-based, Turkish non-governmental organization Union of European Turkish Democrats (UETD), Zafer Sarıkaya, told Daily Sabah on Monday that the resolution will not prove positive for Turkish-German relations, EU-Turkish relations or Turkish-Armenian relations. Enes Bayraklı, a foreign affairs expert at the Political, Economic and Social Research Foundation (SETA), said that the resolution hinders Turkish-Germans from surpassing barriers in German politics and that it upholds disputes as the resolution requires the Armenian genocide to be included in school history books. Despite warnings from Ankara to Berlin about the possibility of deteriorating ties due to the symbolic resolution, German Chancellor Angela Merkel's Christian Democratic Union (CDU) and all other parties in the Bundestag voted in favor of it. In response to the approval of the resolution, President Recep Tayyip Erdoğan strongly criticized Germany on Sunday, saying: "Germany should be the last country to hold a vote on genocide."

Our history is not a history of massacres. Our history is a history of mercy and compassion. This is the difference between us." Prime Minister Binali Yıldırım also criticized the resolution on Friday and said that relations between Turkey and Germany will not be destroyed but that the appropriate response will be given to Germany.

Bayraklı told Daily Sabah that "there was already a negative atmosphere against Turks in Germany, especially towards a certain group of Turks who still hold Turkish citizenship." He said that conservative German Turks are never able to surpass the political barrier they are up against and that there is an issue of representation of the Turkish-German community in German politics. He said that German Turks will face difficulties with the approval of this resolution, stressing that it could bring further disputes as the Armenian genocide will be taught as such in schools.

Sabah Daily's News Director for Europe Cemil Albay stated that they are angry with the German government as well as German politicians of Turkish origin. Sarıkaya said that while the resolution will affect German Turks who, having a large community in every field of society, cannot be underestimated. The head of the Turkish Community in Germany, Gökay Sofuoğlu, told Daily Sabah that the resolution will not help reconciliation efforts between Turkey and Armenia but could further alienate German-Turks. Sofuoğlu said: "We are already experiencing the negative effects of the resolution here in Germany, where German-Turks are expressing their distrust in German politics by threatening and attacking German politicians of Turkish origin." He urged that a common platform be reached where German-Turks can express their positions and provide criticism, adding that it should be up to international courts to decide whether the deportation of Armenians involved systematic killings, as argued by a section of historians disputed by many Turkish scholars.

Ankara's position is that the deaths of Armenians in eastern Anatolia in 1915 occurred after some sided with the invading Russians and revolted against Ottoman forces. Subsequent mass relocations of Armenians resulted in numerous casualties. Ankara denies the term genocide, but acknowledges that there were casualties on both sides during World War I events. Ankara objects to the presentation of the incidents as genocide, rather describing the 1915 events as a tragedy for all. Ankara has repeatedly proposed the creation of a joint commission of historians from Turkey and Armenia along with international experts to research the events.
RELATED TOPICS