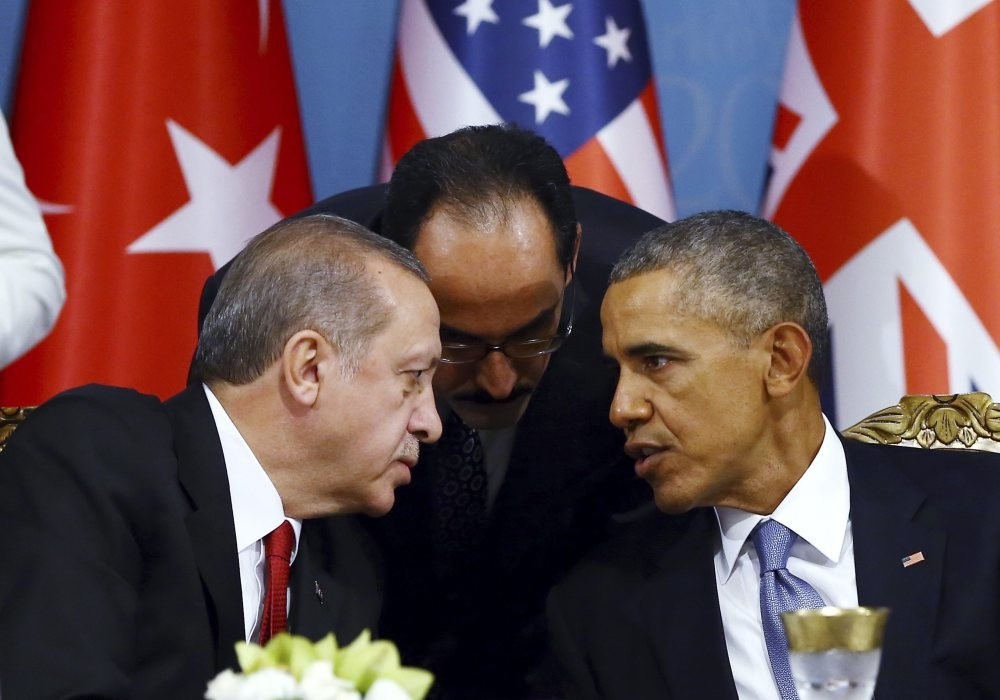 President Erdoğan said that although Turkey and the U.S. had a good start when President Obama assumed office in 2008, Turkey's expectations from the U.S. could not be met and caused disappointment

Speaking on Saturday to journalists on the presidential plane during his flight from Louisville to Ankara after attending the funeral ceremony of Muhammad Ali, President Recep Tayyip Erdoğan said that although bilateral relations with the U.S. had a good start when U.S. President Barack Obama assumed office in 2008, Turkey's expectations could not be met with the passing of time. He said that Turkey had even offered a model partnership instead of a strategic partnership to the U.S. during his visit to country in the aftermath of Obama's election, but these expectations later fizzled out. "For instance, our expectations were not satisfied in terms of the economy. We have even gone backward in this area," he said.

"Expectations were not met in foreign policy either. Obama had said that he would bring a solution to the Iraqi crisis and U.S. troops would completely withdraw from there. This did happen, but they were transferred to Afghanistan."

Indicating that the Syrian PKK affiliate Democratic Union Party (PYD) and its armed People's Protection Units (YPG), which the U.S. supports, only fights against the DAESH terrorist organization to pave the way of a new entity in northern Syria in the future, Erdoğan said Turkey's warnings on the issue were "unfortunately" not heeded.

"You see that there are YPG insignias on the arms of U.S. soldiers and they were photographed intimately with [YPG militants]. All of these accordingly lead to serious resentment to the U.S. in my country. Despite all warnings and notices, the situation that I have mentioned still continues. Of course we feel sorrow under these circumstances," he said.

Erdoğan said that he expected Obama to have a more determined stance on this issue and still expects this even though the U.S. presidential elections in November 2016 are nearing.

"Your NATO ally Turkey is confronting a threat on its border right now. If those who are involved in that threat get strength from you, of course this situation will cause deep sorrow for us, as Turkey."

Regarding relations with Russia and the latest developments on that front, Erdoğan said that Turkish-Russian relations had never-before-seen progress during his time heading the Prime Ministry with the ruling Justice and Development Party (AK Party) and his presidency afterward. He said he is again expecting to restore relations to this level."However, the bilateral relations that were developed to that extent almost came to the end of the road after that event [of Turkey downing a Russian jet in November]. I do not want to say the relations are severed because I still carry the hope to mend the fences in bilateral relations," he said, and added that Turkey's trade volume with Russia was even bigger than with the U.S. and the two countries aim to reach $100 billion in trade.

When asked about the current state of preparations for a new constitution, Erdoğan said the government will intensify the work regarding a new constitution and try to obtain a result by collaborating with opposition parties. "It would be nice if the government can get a result. If not, the AK Party will try to bring its own work into Parliament," he added.

Erdoğan stressed that terrorism can be only minimized. "I interpret the fact that terrorist organizations work together as a sign of their last chance. We will continue our operations with our soldiers as well as our police and village guards. It might take some time to get results from this. Operations will continue until we get some results," he further stressed.

Responding to criticism that a new bill on anti-terrorism measures, Erdoğan said amendments are prepared according to needs. "The aim is for our police and village guards to feel more secure. Maybe 10 or 15 years from now none of our soldiers, police officers or village guards will face attacks legally. We should make them stronger so that they continue the fight more confidently," he added.

"We would be strengthening the terrorist organization if we did not make the necessary amendments due to pure concerns. What is essential for us is to urge our security forces to work on a strong ground. They sacrifice their lives while carrying out the fight. What are they going to do if we do not guarantee their future? Those who talk about concerns, what do they say to the ongoing situation then? They name a park after a terrorist. The state cannot allow such things. Those who act in opposition to the state's functioning will pay for it," he also said.

Erdoğan also touched on the recent incident when Kılıçdaroğlu was thrown a bullet at. "There is the situation of action and reaction. I mean, if you ignore the sensitivity of the people in a period when coffins of the martyred come on a daily basis, this society will respond to you. One should not instigate the people. This is what falls on the shoulders of politicians," he said.

"The remarks a day before might have instigated the relatives of the martyred," he added.

Levying criticism at the republican party, Erdoğan said: "We see in the opposition party a notion of politics that has lost its direction. This is, of course, not a good development. I hope they find their course."
Last Update: Jun 13, 2016 1:57 pm
RELATED TOPICS