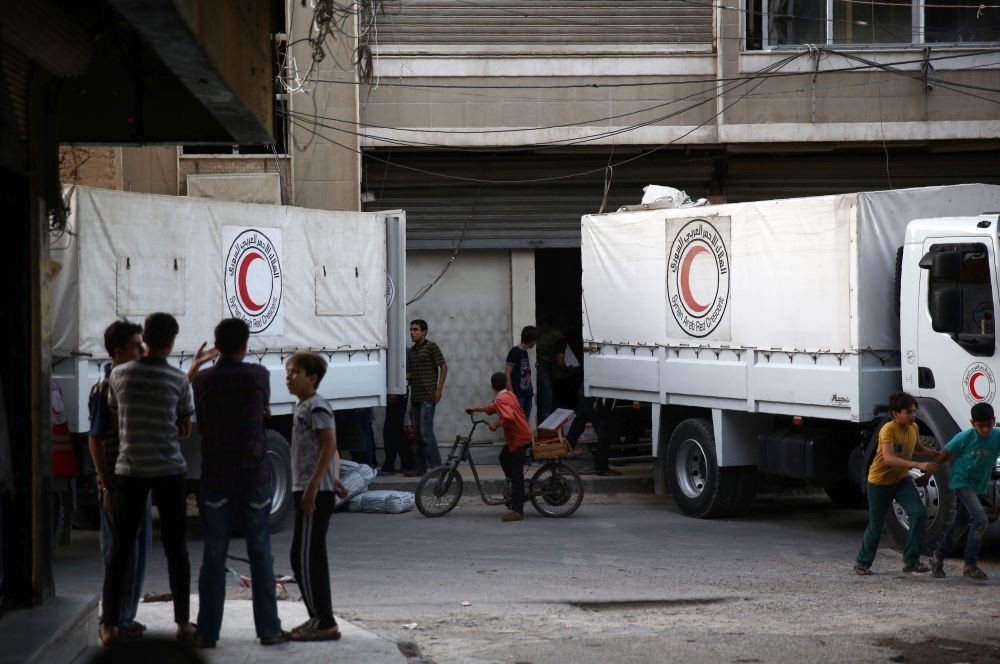 Along with local civilians, the Syria Campaign, a Beirut-based international advocacy group, has accused the United Nations of violating its humanitarian principles, saying the world body favors the Syrian regime in delivering aid to civilians in need

An international advocacy group on Wednesday accused the United Nations of prioritizing its relationship with the Syrian regime over delivering aid to civilians in need, saying the world body is "in serious breach of its humanitarian principles."The Beirut-based Syria Campaign said in a scathing report that the U.N. has "allowed the Syrian government [Syrian regime] to direct aid from Damascus almost exclusively into its territories," at the expense of establishing regular aid access to hundreds of thousands of Syrians besieged by regime forces.

A spokesman for Secretary-General Ban Ki-moon said the accusation "discredits the work of national and international humanitarian aid workers."

"The U.N. has never shied away from calling out the parties in the conflict, including the Syrian government, for hampering the humanitarian work of the UN in Syria," Stephane Dujarric told AP.

"We have to work with the Syrian Government. We have no choice," he told reporters later in New York. "U.N. humanitarian convoys cannot shoot their ways through checkpoints. They're not tanks. They're humanitarian trucks."

The U.N. estimates that some 500,000 Syrians are trapped across 18 besieged areas in the country, most of them encircled by regime forces, while the monitoring group Siege Watch puts the tally at 1 million.

In press briefings and reports to the Security Council, U.N. officials regularly acknowledge that Bashar Assad's government refuses to allow critical aid to enter the areas it besieges -- or, at the last moment, it forces relief workers to offload food and medical supplies from their convoys.

The U.N. and its partners nevertheless reach over six million people with aid every month, according to the Secretary-General's office. The U.N.'s resident coordinator in Syria, Yacoub El Hillo, said the world body would not "condemn people in non-besieged areas to starvation," just because besieged areas are beyond reach.

In a March 2016 self-evaluation of its Syria crisis response, the U.N.'s humanitarian coordination office OCHA said it had no systematic means to assess "needs within Government territory, nor the impact of work done to date, or even, arguably, where the majority of assistance has gone."

The Syria Campaign report, which relies on anonymous testimony from U.N. officials as well as public reports, recommends that the world body "suspends cooperation" with Damascus if the regime continues to infringe on the U.N.'s independence.

It accuses the U.N. of failing to use its leverage with Assad's government. "The government needs U.N. aid to support vast numbers of citizens," the report said.

The Campaign says the U.N.'s deference to Assad's government plays into the latter's "surrender or starve" tactic, pointing to a U.N.-brokered truce in which residents of rebel-controlled central Homs were evacuated in exchange for badly needed food and medical aid in 2014. Hundreds were then arrested by the regime, and most of the city, once seen as the epicenter of the 2011 uprising, has since returned to regime control.

Syria has been locked in a vicious civil war since early 2011, when Syrian leader Bashar Assad's regime cracked down on pro-democracy protests – which erupted as part of the "Arab Spring" uprisings – with unexpected ferocity.

Since then, more than a quarter of a million people have been killed and more than 10 million displaced across the war-battered country, according to the U.N.

The Syrian Center for Policy Research has estimated the death toll from the six-year conflict at more than 470,000 people.
RELATED TOPICS