Self-sufficiency in defense a must for Turkey, Erdoğan reiterates 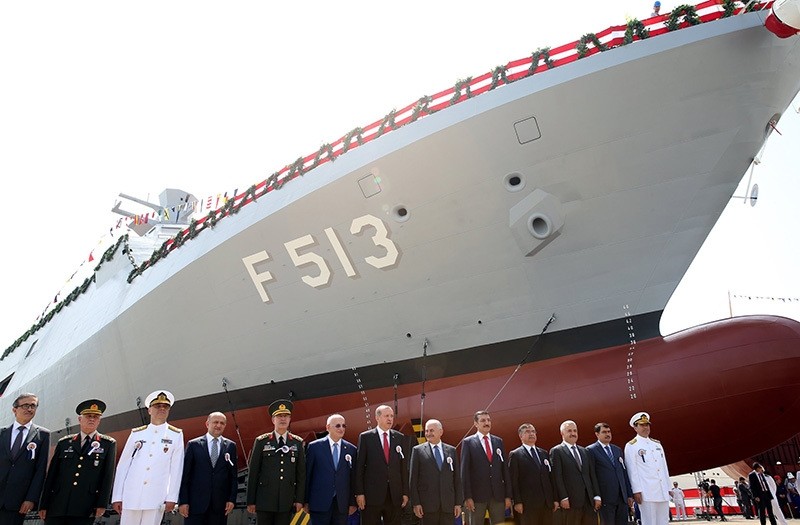 President Recep Tayyip Erdoğan reiterated Turkey's goal of self-sufficiency in defense as he launched a new warship on Saturday.

Speaking at the launch of the TCG Burgazada, an indigenously produced corvette, at the Istanbul naval shipyard, Erdoğan said Turkey would soon "be in a position to make our own aircraft carriers. Turkey, especially, cannot stall on defense industry and military issues because of our strategic geographical location."

The president has previously said Turkey's defense industry will be self-sufficient by 2023, the centenary of the declaration of the republic.

The Burgazada is the third Ada-class corvette produced under the MILGEM project. The first was the Heybeliada, launched in 2008.

The ships, which are named after the Princes' Islands off Istanbul, are designed for search and rescue, patrol and anti-submarine warfare duties and are armed with a 76 millimeter gun, missiles and torpedoes and carry a Seahawk helicopter.

Erdoğan also performed a "welding ceremony" on the TCG Kınalıada, another MILGEM corvette that is due to be completed in May next year.

"Turkey's domestic production rate in the defense industry increased to 60 percent from 24 percent," he said. Reducing dependence on foreign arms imports is a key goal of the Turkish defense industry.

Also present at the ceremony, Prime Minister Binali Yıldırım said the government had invested $30 billion in the defense industry over the last 14 years.

"Turkey is in a fire circle and many oppressed nations wait for our support," he said. "Thus, we have to improve our defense and deterrence capability. When we do that, we need to use local and national resources."