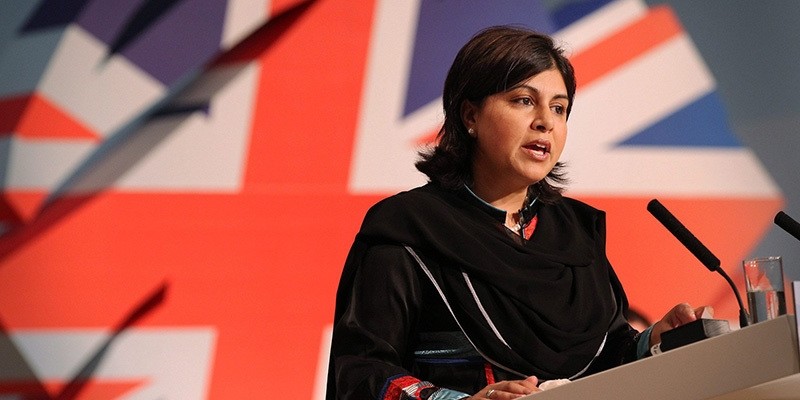 Sayeeda Warsi speaks to delegates at the Conservative Party Conference at the International Convention Centre on October 3, 2010 in Birmingham, England.
by Anadolu Agency Jun 20, 2016 12:00 am

The former Foreign Office minister accused the Leave campaign of telling "complete lies" about Turkey's EU membership and announced she now supported a vote for Britain to remain in the European Union.

She said the final straw was seeing U.K. Independence Party leader Nigel Farage reveal a poster depicting a long line of migrants, most of them non-white and nearly all male, curving away into the distance with the slogan, "Breaking point: the EU has failed us all."

Warsi told The Times on Monday: "That 'breaking point' poster really was — for me — the breaking point to say, 'I can't go on supporting this'. Are we prepared to tell lies, to spread hate and xenophobia just to win a campaign? For me that's a step too far."

"He knows full well that of the 35 chapters [that Turkey needs to comply with in order to gain EU membership] only half have been opened and one completed. To try to suggest that this is anyway imminent, or to suggest that visa-free travel isn't just for Schengen countries, well these are just lies.

"Michael actually went further than that and suggested people would be able to come from Syria and Iraq," she said.

A spokesman for the Vote Leave campaign told the newspaper: "We don't remember Warsi ever joining our campaign so we are puzzled by her claims to have defected."

Opinion polls over the weekend showed a slight swing back to the Remain camp after the Leave campaign took the lead early last week.

Voters across the U.K. go to the polls to decide on the future of their country's EU membership on Thursday.