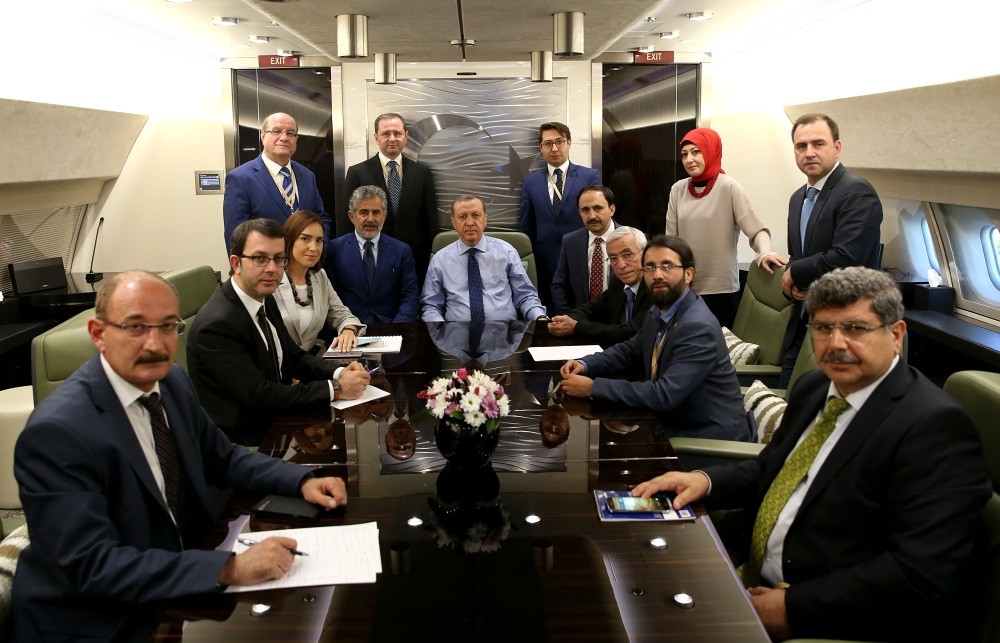 President Erdou011fan on the Presidential Plane with journalists, including Daily Sabah Editor-in-Chief Serdar Karagu00f6z (center-back), on his return flight from the NATO summit.
by Serdar Karagöz Jul 11, 2016 12:00 am

To prevent every country from tinkering with the definition of terrorism, the world needs to agree on a single and universal definition, President Erdoğan said on his way back from the NATO summit in Warsaw

President Recep Tayyip Erdoğan, speaking to reporters accompanying him late on Saturday on his return flight from Warsaw where he attended the NATO summit, said the world needed a universal definition of terrorism to prevent every country defining it any way they want to. "If such a definition is included in international law, then there can be no difference between what Turkey or Germany defines as terror." The legal definition of terrorism in Turkey, which is currently engaged in major counterterrorism operations against internationally recognized terrorist groups such as the PKK and DAESH, sparked objections from EU authorities, who exploited it to scupper the refugee deal and reject granting Turkish nationals visa-free travel. Erdoğan referred to an attempt to create an internationally accepted definition of terrorism 20 years ago, but argued that the international developments since then had made it necessary to update it.

"In the past 14 years, we, as Turkey, prepared our counterterrorism laws in line with international norms. We now call on those who want us to reassess it to pay attention to the current international state of affairs." He cited the recent spate of attacks by the PKK and DAESH that killed hundreds of civilians across Turkey, as well as similar attacks in Brussels, Paris and Lahore, and demanded a new universal definition of terrorism in light of the current state of the world. "I constantly brought up the issue of Syria during the summit," Erdoğan said. "Everyone is placing DAESH at the center of every conversation on terrorism. Was there a DAESH before the U.S. invasion of Iraq? There was only al-Qaida, which later morphed into DAESH."

He said he had informed the attendees about the danger posed by the PKK and its various affiliates.

On the latest condition of the PKK, Erdoğan said the group was bedeviled by constant intra-fighting and arguments about the future. "They can no longer hide it. The increase in the number of those abandoning the group also points to this."

He said the NATO summit on July 8-9, which brings together heads of state and government of alliance members every two years, was focused on the future of NATO's priorities and needs in light of international developments. "We had the opportunity to discuss the alliance's capacity to project stability and increase its capabilities, especially in counterterrorism." At the summit leaders agreed to improve cooperation and collaboration among allies, Erdoğan said, as well as strengthening ties between the alliance and the EU. "The vision and suggestions on strengthening NATO-EU ties will naturally be assessed within both institutions until the foreign ministers' meeting in December. For us, compliance to the present regulations and structure of NATO-EU relations is of utmost importance."

He said the EU's increasing need for NATO's support had become apparent after the U.K. decision to withdraw from the EU. "That's why we need to formulate a basis cooperation that includes all European allies, including those that are EU members and not, and Canada, to establish a stronger Transatlantic collaboration."

Erdoğan also emphasized the importance of NATO's ties to its partners, including Ukraine and Georgia. "We approved the comprehensive aid package for Ukraine at the NATO Ukraine Commission attended by President Petro Poroshenko. The importance of continuing a dialog with Russia based on international pledges and law was emphasized, while alliance agreed that preserving NATO's deterrence capability was crucial.

Turkey continued to call for the admittance of Georgia, which he described as a strategic ally, to NATO, Erdoğan said, as well as supporting the memberships of Bosnia and Macedonia as a way to expand the alliance's stabilizing influence. "No one should be scared of such an expansion. This will strengthen the alliance. These countries may be sources of problems now, but this way they will free themselves of such issues. In bilateral meetings, all our counterparts agreed with this assessment."

He said the summit had provided an opportunity for him to hold comprehensive meetings with Bosnia's term-President Bakir Izetbegovic, British Prime Minister David Cameron, German Chancellor Angela Merkel, Hungarian Prime Minister Viktor Orban and Finnish President Sauli Niinistö, while short meetings with heads of state and government from Greece, Estonia, Canada, Bulgaria and Italy. He said he also spoke to U.S. President Barack Obama, who was sitting next to him during the summit. The NATO Parliamentary Assembly will meet in Turkey this November, Erdoğan mentioned, adding that if other allies agreed the next NATO summit in two years' time will be held in Istanbul.

Turkey also reaffirmed its continued support for NATO's Afghanistan operation with both funds and soldiers. "We have already channeled $37 million of the $60 million we pledged to pay until the end of 2017, and will do so according to schedule. We also pledged another $60 million in aid for 2018-2020." Turkey's efforts in Afghanistan are mainly logistical support, including the management of Kabul Airport, Erdoğan said, adding that Turkey would consider requesting logistical support for any NATO operation.

When asked about the U.S. delivery of the High Mobility Artillery Rocket System (HIMARS) to be used against targets in Syria, Erdoğan said American authorities constantly delayed the delivery after first promising to deploy them in Turkey in May. "Our Fırtına howitzers are more than capable of hitting targets but their maximum range is 40 kilometers while HIMARS have a range of 90 kilometers. Our officials are following the matter up with their American counterparts"

POLICE VIOLENCE DOES NOT BODE WELL FOR US

The recent racial tension in the U.S. caused by police shootings of blacks does not bode well for the social welfare of the country, the president said. He said more than 560 civilians in the U.S. had died in the past seven months. "What is the basis of this social disease? That's what they should look into. Such developments show how we, as politicians, need to be careful and differentiate between a terrorist and a civilian."

Police officers need to be entrusted with necessary, but not unlimited, powers to do their jobs, he said, adding that there can be no explanation for a police officer shooting a handcuffed man lying on the ground.

AN AID SHIP TO GAZA EVERY MONTH

The reconciliation deal with Israel allowed the first shipment of aid to the Gaza Strip last week, the president noted, adding that Turkey hoped to establish a monthly lifeline of aid shipment to the region. "We talked to [Hamas leader] Khaled Mashal for Ramadan Bayram and he thanked me for the aid. The deliveries from the ship, which was carrying 14,000 tons of aid, is still continuing. Our first objective is to send a ship every month. Israel has no objections."As the dialog between the two sides strengthens, Turkey will launch a series of construction projects, including building schools and hospitals, Erdoğan said, and added that there will be initiatives to address the region's electricity and clean water problems.

When asked whether other Muslim countries had volunteered to join in helping the Gazans, Erdoğan said: "There are a few countries that pledged to support us. We will first calculate the annual outlay of our efforts and will establish a plan to share the cost.

President Erdoğan criticized some of the reactions by opposition politicians to his remarks earlier this month about granting some Syrian refugees in Turkey citizenship. "Is it appropriate for a country to reject if a human being lodges a citizenship application? It is OK for a Turk to go to Germany or the U.S. and become German or American citizens, but not so good when Turkey does the same. Moreover, we have lived with these people in friendship and brotherhood for years. They have fled their countries and saw us as a haven from violence. Can we sentence them to live in camps or ramshackle rooms forever? Instead, let relevant ministries work on alleviating their suffering. We can even grant them housing from empty Mass Housing Administration (TOKİ) lots, which they can pay back in instalments, as we did for the Meskhetian Turks from Georgia."

He also said that most working-age Syrian refugees either worked illegally or did not work at all. "We are calling for a solution to this problem. There are engineers, lawyers, doctors, teachers among them and they can be an asset to Turkey."

A system of dual citizenship can allow those who want to return to do so, while the rest can make Turkey home, he said. "There is no reason to fear such developments. Turkey, with an area of 780,000 square kilometers, is home to 79 million people. Germany, with half as much territory, has a population of 85 million. We are a country that can easily surmount such problems."
RELATED TOPICS