Democracy, people's will prevail in face of Gülenist coup attempt 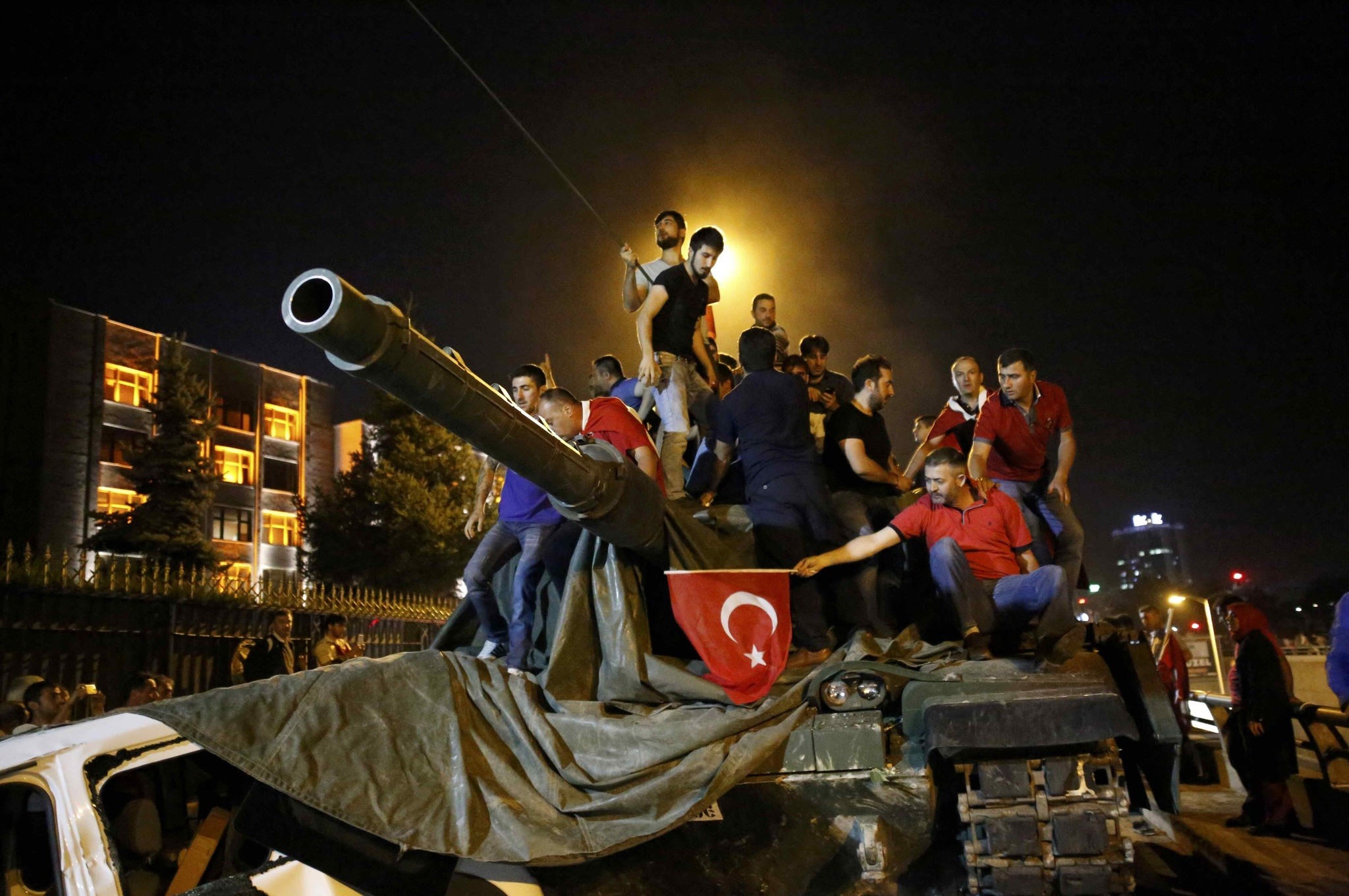 The illegitimate coup attempt by Gülenist soldiers and military officers' exposes the shameful and cruel face of the Gülen Terror Organization. Defying the coup attempt, hundreds of thousands of people flocked to squares and streets to stand up for democracy

Turkey witnessed a disgraceful night in terms of respect for democracy and the people's will after Gülenist soldiers and military officers staged an illegitimate coup attempt. Fighter jets flying over the capital Ankara and Istanbul all night, opened fire on civilians and bombed Parliament, doubling the Gülenists' shame. Despite the Gülenist military officers trying to drag the country into chaos, the Turkish people's will and resolution to defend democracy and the democratically elected president and government helped repel the coup attempt. President Recep Tayyip Erdoğan and Prime Minister Binali Yıldırım's pleas for citizens to take to the streets and stand up for democracy led to a country-wide resistance against the coup attempt.

"I invite our nation to squares. I have not seen a stronger force than the nation," President Erdoğan said on live TV shortly after the coup attempt started across the country. "Those who attempted this madness will pay the heaviest price," Prime Minister Yıldırım said live on TV. Millions of people flocked to squares and streets to say "no" to the putschists. People got on tanks, disarmed coup soldiers and took back control of raided institutions. Gülenist fighter jet pilots and helicopters opened fire on people and bombed Parliament. In addition, tanks drove toward people on the streets and ran over many.

Even though President Erdoğan and Prime Minister Yıldırım have repeatedly stressed that the Gülen Movement is an armed terrorist organization, the international community remained indifferent to the warnings.

Fethullah Gülen, a fugitive imam and leader of the Gülen Movement, was expected to make a Khomeini-style return to Turkey had previous coup attempts prevailed.

On Feb. 7, 2012, a Gülenist prosecutor wanted to question National Intelligence Agency (MİT) head Hakan Fidan, after which he aimed to expand the case and detain then-Prime Minister Erdoğan. This Gülenist move was interpreted as a sign to topple Erdoğan.

Gülenist figures kept silent over the coup attempt on social media, urging people not to take to the streets. Gülenist journalist Tuncay Opçin wrote on his Twitter account only hours before the coup attempt that President Erdoğan will be captured in his bed and hanged.

Emre Uslu, a prominent Gülenist fugitive in the U.S., had written on his official Twitter account a year ago that he would return to Turkey in July 2016. He also wrote in March that he was looking for cheap plane tickets for late July. Both President Erdoğan and Prime Minister Yıldırım are quite firm in their stance. They refuse to give in to slackness, saying that all citizens should beware. "I specifically want to stress that we will address this issue resolutely and no one can test our determination regarding this matter," Erdoğan said.

All parties in Parliament decried the coup attempt by a small clique of Gülenist-linked military commanders which took place late Friday. Nationalist Movement Party (MHP) Chairman Devlet Bahçeli made a telephone call to Prime Minister Binali Yıldırım on Friday and said the attempted coup was not acceptable. According to a statement from the Prime Ministry, Bahçeli said his party is in solidarity with the Turkish Republic. Later, in a written statement, Bahçeli said an attempt at suspending democracy and ignoring the national will was a big mistake.

"The price Turkey will pay will be considerably high in the event of a civil war in Turkey. As Turkish people, we need to be distant to all kinds of interventions risking our national unity and integrity," he said.

"This country was wracked with coups. We do not want to go through the same troubles. We'll protect our republic and democracy; keep our commitment to the free will of our citizens."

The Turkish Supreme Board of Judges and Prosecutors (HSYK) laid off 2,745 judges and removed five members after an extraordinary meeting on Saturday, which came after a failed coup attempt by the Gülenist Terror Organization (FETÖ), while 10 Court of Appeals members were detained, and detention warrants were issued for 140 others.

At least 1,563 army personnel, including give generals and 29 colonels were detained across Turkey on Saturday according to the Interior Ministry, after a bloody coup attempt by the FETÖ terror organization, headed by U.S.-based preacher Fethullah As a result of the attempted coup, 161 people were killed, including 41 police officers and 47 civilians, while over 1,154 people were injured. Some 104 pro-coup figures were also killed.

Seven military personnel and a civilian on board a Turkish military helicopter were arrested after landing in north Greece, reports said on Saturday.

Foreign Minister Mevlüt Çavuşoğlu said that his Greek counterpart told him that all eight suspects will immediately be extradited to Turkey.

A Blackhawk military helicopter landed at the airport in the city of Alexandroupolis in northeastern Greece and the passengers were arrested for illegal entry into Greece.

The Greek government said that the Blackhawk helicopter will be returned to Turkey as soon as possible, and added that the asylum demand of the eight coup-involved staff will be examined.