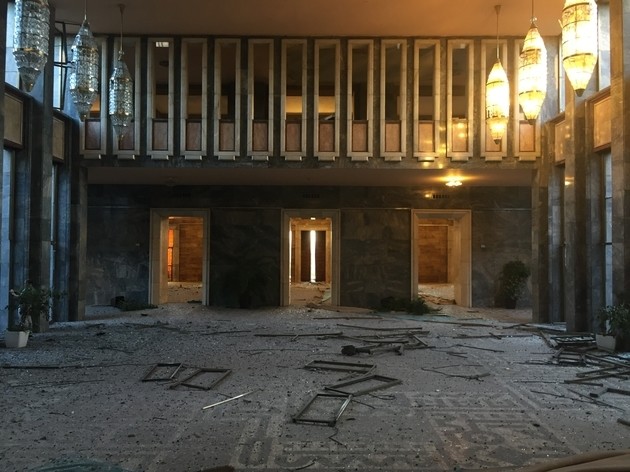 by Ali Ünal Jul 17, 2016 12:00 am
Among the targeted facilities by the Gülenist soldiers attempting a coup was Parliament, the focal point of Turkish democracy. Coming after hearing the news regarding the attempted coup, parliamentary spokesman İsmail Kahraman, numerous ministers and Justice and Development Party (AK Party), Republican People's Party (CHP) and Nationalist Movement Party (MHP) deputies spent the night at Parliament. Parliament compound was bombed seven times. Due to the bombings, several police officers and parliamentary officials were wounded.

The junta bombed Parliament while Justice Minister Bekir Bozdağ was holding the floor. After the second bomb, which caused significant damage to the building, deputies went down to the shelter, as their first destination, the boiler room, was found to be insecure.

İsmail Kahraman headed Parliamentary session during the coup attempt. "We are the representatives of the sovereign Turkish people and our unity tonight also represents our people's unity," said Kahraman, while the bombing continued.

MHP Deputy Chairman Oktay Vural witnessed the horrendous events. Speaking to Daily Sabah, Vural said that he witnessed the attacks while he was trying to reach Parliament. "We were analyzing the developments with our chairman. We decided to go to Parliament, as we believed that it would bolster the morale of our people during a coup that targeted their sovereignty. While we were entering Parliament with a fellow deputy and my son, a helicopter fired upon us and, fortunately, we were able to survive unharmed. Moreover, as the general assembly was in session, there were several more bombings and Parliament sustained heavy damage. However, we are a great country and people and as their representatives, we tried to empower the people," remarked Vural.

Stating that it is hard to express what he has gone through, Vural said, "Turkish people are strong enough not to surrender to terrorists. The cutthroats who were frenzied to that extent to bomb Parliament should be punished accordingly. The attacks on Parliament revealed the importance of protecting and promoting values such as democracy and rule of law."

Chairman Mustafa Yeneroğlu of Parliament's Human Rights Investigations Committee was one of the deputies present at the parliamentary session. "The bombings started after the parliamentary speaker's speech. If it had happened 15 minutes earlier, hundreds of deputies might have lost their lives at the very halls that suffered the most damage," said Yeneroğlu. Stating that Parliament had never been targeted, even during the War of Independence, Yeneroğlu said "the frenzied and inhumane junta targeted Parliament deliberately." Praising the Turkish people and the press for standing united in the name of democracy, Yeneroğlu said that the views from the street were inexpressible. "We have witnessed people being ruthlessly slaughtered, citizens who tried to block the tanks with their own automobiles. All of the horrendous acts against our people are crimes against humanity," he added. Yeneroğlu expressed that Turkey showed its determination in preserving democracy, while affirming that military coups only bring blood and tears, making human rights and justice devoid.

CHP Deputy Utku Çakırözer also expressed what he witnessed during the night. "We swiftly went to Parliament. During the general assembly, the bombings started. Afterwards, security forces advised that we should go to the shelters and we did so. We stayed at the shelter for six hours and even then, we were hearing the sounds of bombs," remarked Çakırözer. Asserting that the CHP is against coups and knew no power over the power of the people, Çakırözer added: "Coup attempts to democracy and the parliamentary system are unacceptable. People and their representatives, us deputies, stood united against the coup and were able to prevent it from happening. Parliamentary system may have its faults; however, these should be resolved with democratic methods. A coup can never be justified."
RELATED TOPICS