Erdoğan: FETÖ would have killed me had I been 10 minutes late 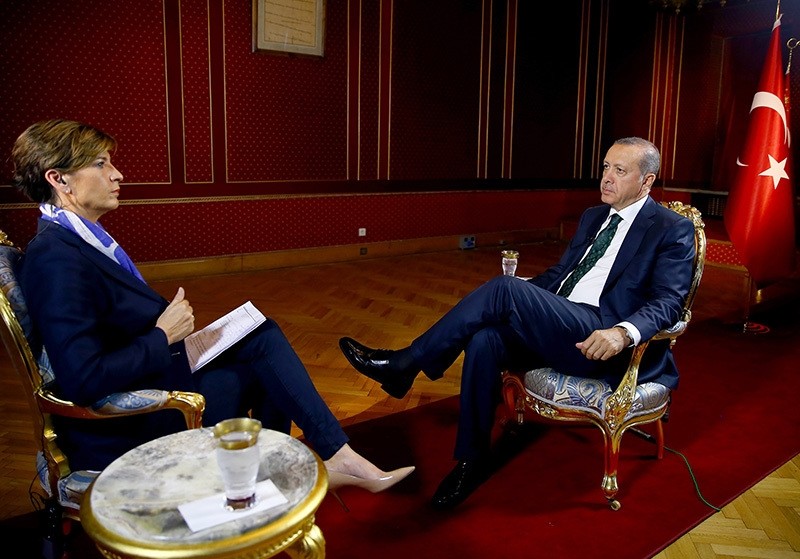 Recalling the Gülenist coup soldiers’ raid on the hotel where he was staying on July 15, President Erdoğan said they would have killed or captured him had he been 10 minutes to 15 minutes late

President Recep Tayyip Erdoğan, giving his first media interview since Friday's dramatic failed coup attempt, said Monday that the Gülenist Terror Organization (FETÖ) coup soldiers would have killed him had he stayed in the hotel that night 10 minutes or 15 minutes longer.

Commenting on FETÖ leader Fethullah Gülen's extradition process from the U.S., Erdoğan said his government will submit a written request for the extradition of the U.S.-based, retired imam in the coming days.

Erdoğan also gave details about the things he went through throughout the failed coup attempt. He said that he escaped death by only a few minutes before coup plotters stormed the resort in southwest Turkey where he was vacationing last weekend.

He told CNN that soldiers supporting the coup killed two of his bodyguards when they stormed the resort early Saturday.

Revealing new details of the night of the failed coup, Erdoğan said the renegade soldiers were in control of the command and control towers at Istanbul's Atatürk International Airport for hours before forces loyal to the government were able to regain control. He said that about 10,000 supporters were at the airport to greet him when his plane landed.

He also said that power was shut off at all military bases, including the Incirlik Air Base in southern Turkey that is used by the U.S.-led anti-DAESH coalition because the military did not want to risk having the conspirators use them.

On Friday, a small military junta linked to the FETÖ attempted to topple the democratically elected government in Turkey and bring martial law. The attempt was prevented by soldiers loyal to the government along with police and millions of citizens in favor of democracy. Two-hundred-and-eight people, mostly civilians, were killed by coup soldiers and over 1,400 people were injured.

Erdoğan also touched on the issue of the death penalty in the interview. He said that it was for Parliament to decide whether to restore the death penalty, but that if it did so then he would sign it into law.

"But of course it will take a parliamentary decision for that to take action in the form of a constitutional measure, so leaders will have to get together and discuss it and if they accept the discussion then I, as president, will approve any decision that comes out of Parliament."

Turkey abolished the death penalty in 2004 as part of its long-standing efforts to join the European Union, and approved legally binding international documents to prevent capital punishment. The last execution was carried out in 1984, a year after the country had free elections and returned to civilian rule following the 1980 military coup. Since then, death sentence cases were not brought to Parliament for approval, and the sentences were not carried out.

It is generally believed that if the death penalty was to be reintroduced, it would be confined to the charges of treason and terrorism. In that case, two problematic cases occur in practice. The first one would be determining the actual target of such a legal reform, as death penalty is currently not in effect in Turkey, death sentences for coup plotters cannot be applied in accordance with the universal principles of law. That's why if ithe penalty was reintroduced, it would have to go through such a reform which would need so much political credit that it would only go as far as being a "deterrent" for future cases.

The second case would be, among all other commuted cases, the case of the imprisoned leader of the PKK terror organization, Abdullah Öcalan, who was sentenced to death penalty in 1999. Öcalan was among the death penalty convicts that benefited from the removal of the death penalty in 2002. Öcalan, despite his crimes, is highly regarded by a large portion of Kurds inside Turkey, and his execution is likely to add up more tension to the ongoing armed insurgency of the PKK against the Turkish state.

The status of Öcalan would be among the key determinants for a possible vote at the parliament, as the ruling Justice and Development Party (AK Party) holds 317 out of the total 550 seats at the parliament, falling 13 short of the 330 required seats to take issue to referendum and 50 short to approve it at the parliament and present it to President Erdoğan's approval.

The Nationalist Movement Party (MHP) had voted against lifting the death penalty in 2002 — although it was a coalition partner at the time — and has advocated for reintroducing it ever since, especially for cases related to terrorism. The party has 40 seats at parliament, however, the status of Öcalan and introducing capital punishment for terror charges would be key determinants for the voting tendencies of MHP deputies.

The majority of the voter base and deputies of the AK Party would likely support reintroducing the death penalty after the recent coup attempt, as the party previously voted against lifting the death penalty in 2002, when it was at the opposition and newly founded. However, it is not clear how many deputies would actually vote for a reform that would involve all terror charges to gain votes from the MHP, as the party appeals to an indeniable liberal-conservative and Kurdish voter base.

The main opposition center-left Republican People's Party (CHP) leader Kemal Kılıçdaroğlu has recently said that they will wait for the government's proposition for a such a reform. The party, however, due to pressure from its deputies and voter base, is not likely to support reintroducing the death penalty.

The Peoples' Democratic Party, a coalition of pro-PKK Kurdish political line with several socialist parties, announced that it will vote against such a proposal.