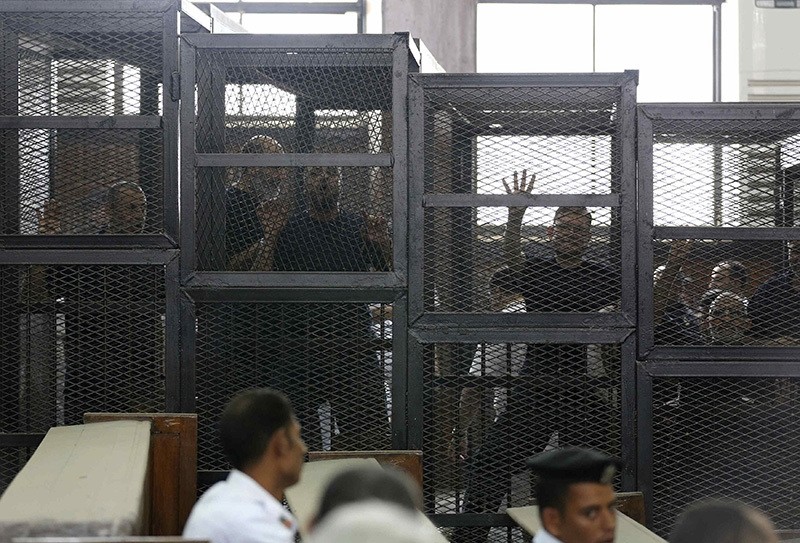 Muslim Brotherhood's General Guide Mohamed Badie (R) is pictured in a defendant's cage with other defendants in a courtroom in Cairo June 7, 2014. (Reuters Photo)
by Anadolu Agency
Jul 21, 2016 12:00 am

"Turkish people have shaped a historic day" and "gave hope to millions of Egyptians", Haddad said.

A group within the Turkish army associated with Fethullah Terrorist Organization (FETÖ) attempted a coup on July 15. Millions of Turkish people took to the streets and more than 240 lost their lives and 1,500 were injured while defending democracy.

"They showed significant courage and steadfastness. People from all ethnicities, beliefs and political backgrounds were united against the attempted coup," Abdullah El-Haddad said, adding:

"They managed to resist the guns and tanks with bare chests. My heart goes with those who lost their loved ones. Turkish people shaped a new historic day in the country's modern history."

Haddad, who is former spokesperson for Muslim Brotherhood in the U.K., has said he was "shocked" when he heard about the coup attempt.

"First, I was shocked, then when I saw the tanks, I started to go through a deja vu and I was worried because in Egypt it ended with bloodshed," he said. "When people started to go on the streets to celebrate and army tanks started to withdraw, I felt proud of my Turkish brothers and sisters who fought hard for their country."

"The president, along with the elected government officials, managed to counter the attempted coup by conducting smart decisions and mobilizing people on the streets. For us, as anti-coup activists, we learned much from their efforts," he said.

"Unfortunately, in Egypt's case, the Egyptian opposition welcomed the army's coup, supported mass killings and helped the Egyptian junta in their extreme crackdown on the anti-coup movement."

Haddad has said that both "Egyptian and Turkish junta have the same corrupted values".

"They disregarded the people's will, pointed their guns at their fellow citizens and carried out human rights violations," he added.

A UN Security Council statement on Saturday condemned the coup attempt and called on all parties in Turkey to respect the country's "democratically elected government". However, it failed to be adopted after Egypt's objection to the terminology. Regarding Egypt's objection, Haddad said:

"It is no surprise that [President Abdel-Fattah al-Sissi] would make such move. The successful counter-coup efforts and the pictures of the arrested generals would be a nightmare for Sissi and his junta."

Haddad stated that the resistance of "the Turkish people gave hope to millions of Egyptians by countering this attempted coup".

"As an Egyptian whose father and brother are imprisoned by Sissi's junta, I feel more hopeful that that the Egyptian coup will come to an end and I will be able to see them again," he stated.

After the coup attempt in Turkey, Egypt's Muslim Brotherhood has offered its "deepest congratulations to Turkey-the people, the president and the government-on defeating the traitorous military coup attempt".

In a statement published on its official website on July 17, the group said:

"The Muslim Brotherhood takes this opportunity to express its appreciation for Turkey's honorable stances in all important issues around the world in support of truth and justice, rejecting military coups, especially the treacherous military coup in Egypt."