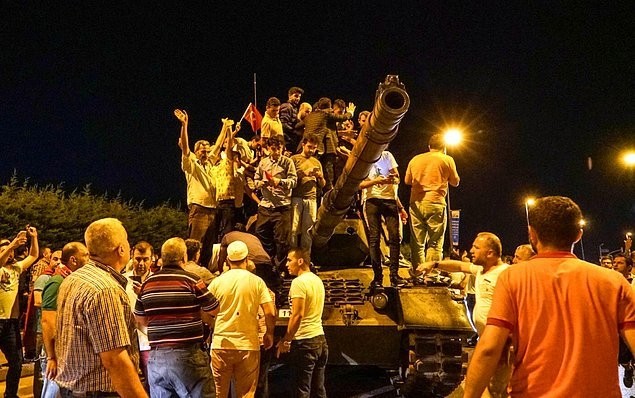 After the failed coup attempt by the Gülenist Terror Organization (FETÖ) that killed at least 240 people and wounded over 1,500 others, the Western media seems to be trying to trivialize the actual coup attempt while instead focusing on criticizing the elected government's response to the would-be putsch.

While the Turkish government says FETÖ is behind the failed coup, which aimed to overthrow the country's democratically elected government, the Western media overlooks the fact that Turkish people took to the streets to protect democracy and the rule of the law against the illegal coup-plotters. Rather, it has focused on the ruling party's so called "authoritarian" reaction to the coup.

The Western media, with many opinion-based articles, has painted the government's measures of suspending FETÖ-linked civil servants and bureaucrats in public institutions as if these measures could be more dangerous than the failed coup that claimed hundreds of lives.

Some Western outlets and broadcasts chose to cover outlandish conspiracy theories that the coup was in fact staged by the government, while others chose to portray the alleged coup leader as "one of the world's most powerful Muslim clerics."

Britain's BBC aired a video saying that accused FETÖ head Fetullah Gülen "has millions of followers in Turkey," without mentioning the movement's 40-year infiltration of critical state institutions like the army, judiciary, security, and intelligence units and various bureaucratic institutions with a variety of identities, aiming to seize control of the state.

An article by the BBC headlined "Erdoğan: Turkey's ruthless president" described President Recep Tayyip Erdoğan as one of the most divisive leaders in the history of modern Turkey, ignoring the fact that people from all sectors of the country and political creeds rushed to the streets to stop the illegal coup attempt that was aimed at overthrowing the elected government.

The Economist published an article headlined "Turkey's failed coup gives its president a chance to seize more power," claiming that Turkey's independent judiciary will be totally eliminated, while not mentioning that the arrest of state officials and civil servants is aimed at safeguarding state institutions from infiltration by forces receiving instructions from abroad.

In an interview with CNN International on Monday, Erdoğan strongly rejected claims that the coup attempt had been "staged."

"Unfortunately, that is mere misinformation. How could one plan such a thing? How could one allow so many civilians to lose their lives? How could human conscience allow that? That is beyond possible," Erdoğan said.

Fox News, ignoring how Turkish people took to the streets and stopped tanks under the control of soldiers who had betrayed the chain of command, said: "Erdoğan will use the coup as an excuse to accelerate the Islamization of his country and to lead Turkey deeper into the darkness engulfing the Muslim world. His vision is one of a neo-Ottoman megalomaniac."

Turkish government officials, in every media appearance, reiterated how the attempted coup was organized by followers of U.S.-based Fetullah Gülen, who is accused of a long-running campaign to overthrow the state through infiltrating the Turkish state, particularly the military, police, and judiciary, forming the so-called parallel state.

Another column, by Foreign Policy's Michael Rubin, said, "Erdoğan Has Nobody to Blame for the Coup but Himself," claiming Erdoğan's foreign policy of "no problems with neighbors" has caused problems with "almost every neighbor."

The New York Times touted a story on its official Twitter account saying, "Erdoğan supporters are sheep, and they will follow whatever he says," but this sentence did not appear in the article itself, strongly suggesting biased journalism.

The story, headlined "Vast Purge in Turkey as Thousands Are Detained in Post-Coup Backlash," also ignored the fact that the people-even critics of Erdoğan-took to the streets to save their country from an illegal military takeover.

In another Times story headlined, "Erdoğan Triumphs After Coup Attempt, but Turkey's Fate Is Unclear," the newspaper gave the false impression that all Turkish citizens who flooded the streets on the night of the coup attempt were supporters of President Erdoğan and the ruling Justice and Development (AK) Party.

What really happened was totally different. Numerous citizens without political affiliation-or affiliated with the country's main opposition parties (including both the Republican People's Party, or CHP, and Nationalist Movement Party, or MHP)-also participated in the anti-coup demonstrations that convulsed the country on Friday night.

Before the coup attempt's defeat Friday, the U.S. Daily Beast website posted a story saying that Erdoğan had left the country and his whereabouts were unknown.

The website went so far as to claim that Erdoğan was seeking asylum in Germany, citing false claims by a U.S. military official to NBC News. The website later changed its headline, however, to "Turkish President Recep Tayyip Erdoğan's Location Is Unknown," adding, "The Daily Beast could not confirm these reports."

The fact is that the president never left the country during the illegal coup attempt. Rather, he quickly headed to Istanbul after urging citizens to take to the streets to uphold Turkey's democratic institutions.

Major German daily Die Welt, meanwhile, criticized the Turkish government's "merciless" crackdown on suspected coup-plotters, while ignoring the massacres committed by pro-coup elements of the army against civilians on the night of the failed putsch.