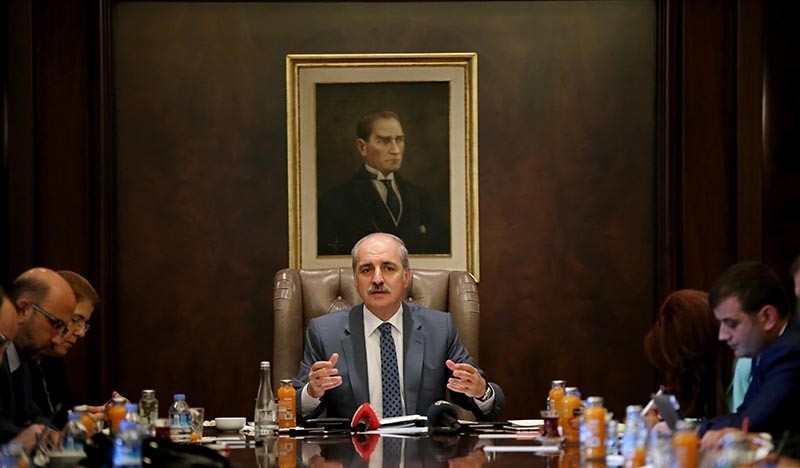 Deputy Prime Minister Numan Kurtulmuş said on Wednesday that all "coup-plotting terrorists" will be removed from state institutions.

In remarks made to the media before his meeting with Turkish-origin Kosovar politician Mahir Yağcılar at the Çankaya Palace in Ankara Wednesday, Kurtulmuş said: "These coup-plotting terrorists [involved in the July 15 coup attempt] will be purged from state institutions," he said. "We will democratize our system so that nobody will ever think of plotting another coup in Turkey."

He said the democratization process would begin with the Supreme Military Council meeting set to take place at the Çankaya Palace Thursday.

The meeting is expected to announce some major changes in the military's management.

"We will remove all of these parasites, enemies of state and their collaborators from the Turkish Armed Forces," he said. "More importantly, we will fix civil-military relations systematically so that there will never be another coup.

"Turkey will be a more democratic country with measures taken after the failed coup."

Meanwhile, later in Wednesday, Kurtulmuş spoke on TGRT television and shed light on the probe into the FETÖ coup attempt, saying there are many faces involved which still need to be observed: "There is a civil part of it, inside and abroad, judiciary part, police and political sides, all should be found out."

He highlighted some points which should be taken into consideration such as "loyalty to the nation, merit and competence".

"Any parties, Kurds, Turks, Alevis, Sunni, democrats, conservatives, nationalists, regardless of their ethnic and religious origin should meet these principles," he stated.

He further pointed out: "If we can get everyone access to the state system, we get access to reform our political system as well."

"Every defendant's testimony reveals a number of new things. Believe [me], every day we are getting aware of different things, very complicated things. I think these are just the tip of the iceberg; there are unseen parts of it [FETÖ]," he added.

Kurtulmuş went on to say: "We thwarted a very treacherous coup bid, which Turkey never experienced and also planned to drag Turkey into a civil war and available to be occupied by external forces."

At least 246 people, including members of the security forces and civilians, were killed during the failed coup, and more than 2,100 others were wounded in the ensuing protests in the wake of the attempted coup.

U.S.-based Fetullah Gülen and his Gülenist Terror Organization (FETÖ) have been accused of a long-running campaign to overthrow the state through the infiltration of Turkish institutions, particularly the military, police, and judiciary, forming what is commonly known as the parallel state.