Erdoğan slams countries standing by coup plotters instead of democracy 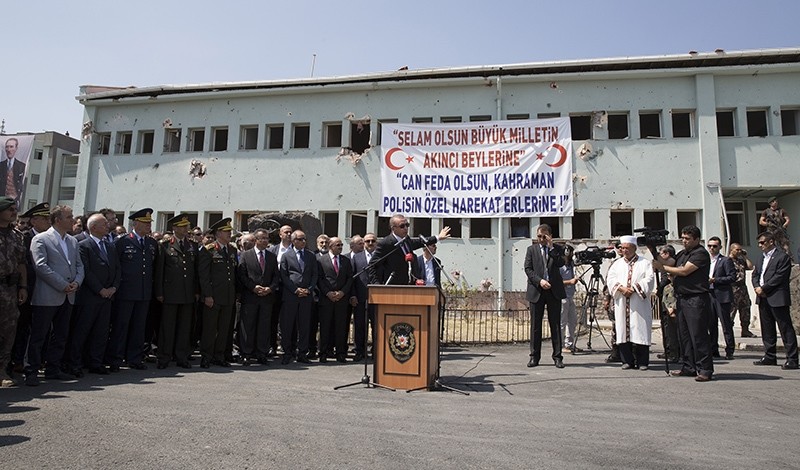 President Recep Tayyip Erdoğan criticized some countries which should be praising Turkey for putting down coup, but are instead standing by plotters.

Erdoğan spoke during a visit to the Special Forces Headquarters in Gölbaşı, Ankara, where he criticized those on the side of coup plotters, including Joseph Votel, a four-star general in the United States Army who serves as commander of United States Central Command.

"The world is watching Turkish people on democracy watch and says they're concerned about the future," Erdoğan said and added that the number of detentions and arrests will increase if people are guilty.

He slammed General Volter for his recent remarks, when he said the coup bid and subsequent round-up of Gülenist generals could affect American military cooperation with Turkey:

"We have certainly had relationships with a lot of Turkish leaders -- military leaders in particular. I am concerned about what the impact is on those relationships as we continue," Votel said, and expressed his concerns that in the long run the coup and Ankara's efforts to clear the military of coup supporters would have an effect on U.S. operations in the region.

Erdoğan said that Gen. Volter should be thanking the Turkish state and people for standing against the coup and protecting democracy, but instead he chooses to side with the coup plotters.

At least 246 people were killed and over 2,100 injured during the bloody June 15 coup attempt, which was carried out by a group of rogue soldiers affiliated with the Gülenist Terror Organization (FETÖ), led by U.S. based Fethullah Gülen.

Gülen is also accused of a long-running campaign to overthrow the state through the infiltration of Turkish institutions, particularly the military, police and judiciary, forming what is commonly known as the parallel state.

Although the U.S is an ally of Turkey, Turks remain suspicious of American involvement in past coups. The 1980 coup propelled this anti-U.S. sentiment as the United States was viewed as a staunch supporter of the coup generals.

Almost two thirds of Turks believe Gülen was behind the failed coup attempt in Turkey on July 15, a survey conducted by pollster Andy-Ar said.