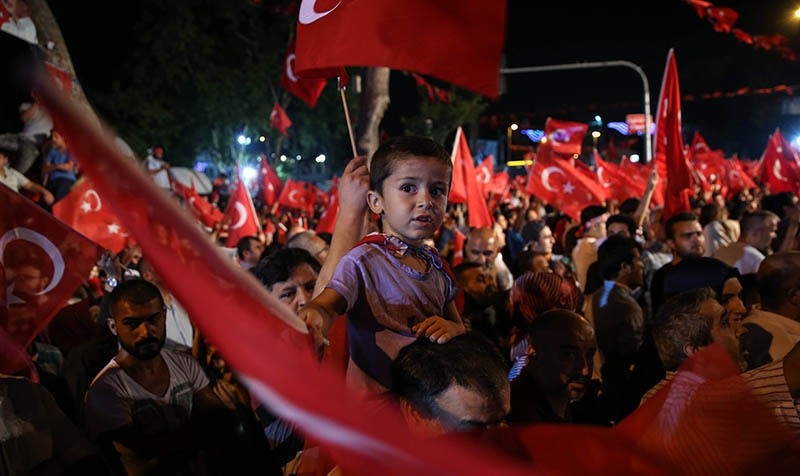 | AA Photo
by Daily Sabah Aug 06, 2016 12:00 am
According to a recent survey, 88.1 percent of Turkish society believes the Gülenist Terror Organization (FETÖ), led by U.S.-based Fethullah Gülen, was behind the coup attempt on July 15.

The results of the survey, conducted by the A&G Research Company from July 30 to Aug. 1 with 3,013 participants in 42 provinces, were announced by the chairman of the company, Adil Gür, on a TV program on Friday. The results indicate that 38 percent of society thinks that the coup attempt was aimed at removing President Recep Tayyip Erdoğan, while 30 percent think the main targets of the coup plotters were Parliament and Turkish democracy.

The survey also revealed that the vast majority of people support the three-month state of emergency with 66.3 percent backing the move, while 71.3 percent of those who participated in the survey said that they believe Gülenist agents within state institutions will be cleaned.

The participants were also asked about the long-debated issue of Gülen's extradition to Turkey. Results show that Turkish society does not think the current U.S. administration is sincere, and only 31.7 percent believe that the FETÖ leader will be extradited to Turkey.

Some 89 percent of the participants believe that the country's political leaders have helped bring back some unity and solidarity, while 90 percent think President Erdoğan has been successful. This figure is 80.9 percent for Prime Minister Binali Yıldırım, 71.8 percent for Nationalist Movement Party (MHP) Chairman Devlet Bahçeli and 61.5 percent for Republican People's Party (CHP) Chairman Kemal Kılıçdaroğlu.

Regarding the most important element that forced the failure of the coup attempt, 89.3 percent of the participants indicated that it was the people pouring onto streets, while 58.1 said it was the president.

The July 15 failed coup attempt brought together people from different spheres, who opposed the toppling of Turkey's democratically elected government led by the AK Party. All political parties underscored that they are against the coup and stood by democracy. The CHP, MHP and AK Party will attend a grand democracy rally on August 7 to underscore their commitment to democracy and the rule of law.