Sandzak is with you, say Bosniaks in pro-democracy rally in support of Turkey 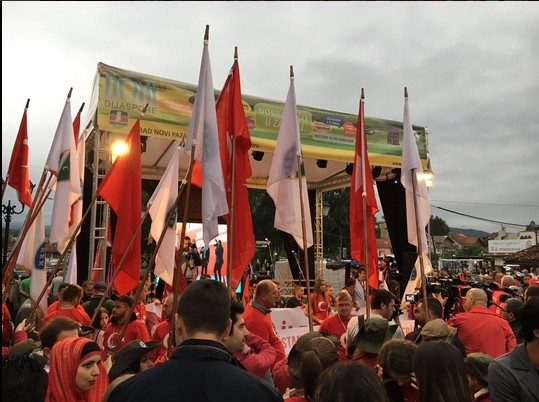 More than a thousand people attended a pro-democracy rally in the Serbian city of Novi Pazar on Sunday to express their support for Turkey.

The rally had been organized by the Society of Friends of Turkey with the support of the main Bosniak parties and organizations in the region.

People from Novi Pazar and across the Sandzak Region attended the rally, and expressed solidarity with Turkey's people, democracy, government and Turkish President Recep Tayyip Erdoğan.

Participants also carried banners written in Turkish, saying "Sandzak is with you, Sandzak is the bridge between Turkey and Serbia."

A video link at the rally also showed the massive gathering of people in Istanbul, where a separate Democracy and Martyrs' Rally was held Sunday to protest against the defeated July 15 coup mounted by the Gülenist Terrorist Organization (FETÖ).

A series of videos about the attempted coup on the night of July 15 was also screened at the rally in the Serbian city.

On behalf of the Friends of Turkey Association, Nafil Sejdovic said: "We defend the basic principle of democracy, the rule of the people. The elected people must be respected.

Turkey's Ambassador to Serbia, Mehmet Kemal Bozay, in his message said: "I firmly believe that this meeting will strengthen the foundations of the existing friendly relations between our two countries of which you are one part."

The Sandzak Region is on the border between Serbia and Montenegro and has a sizable Muslim community.

An estimated five million people attended the pro-democracy rally in Istanbul on Sunday, according to the Istanbul Police Department. The massive gathering of people is believed to be the largest of its kind for a political rally anywhere in the world. It was also the first time the leaders of the Justice and Development (AK) Party, the Republican People's Party (CHP) and the Nationalist Movement Party (MHP) had shared a platform.

Turkey's government has said the July 15 coup bid was organized by the followers of Fetullah Gülen, who has lived in self-imposed exile in the U.S. since 1999. Ankara is asking Washington to extradite Gülen in an ongoing formal process.