Cabinet assesses steps taken and future in fight against FETÖ 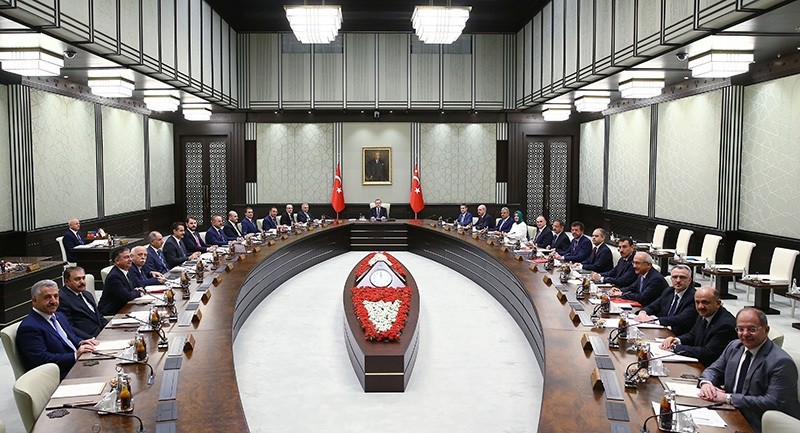 President Recep Tayyip Erdoğan convened with the Cabinet at the Presidential Palace in Ankara on Wednesday with the focus of the meeting on the fight against the Gülenist Terror Group (FETÖ), as well as a new roadmap to combat the group.

Speaking at the press conference held following the Cabinet meeting, Deputy Prime Minister Nurettin Canikli said that Turkish security forces have foiled 229 terrorists attacks since August 15, of which 39 were car bomb and 19 suicide bomb attacks, while in total 151 were including explosives.

Along with the discussion on the PKK, the Cabinet's agenda was topped by FETÖ and the new strategies and roadmap to combat the terrorist group were touched upon along with the latest developments on the extradition of terror group leader Fethullah Gülen. Following the failed coup attempt on July 15, the government began an operation against all FETÖ-affiliates within government institutions and organizations. The Turkish Air Forces dismissed 73 members including 66 commanders and seven sergeants on Wednesday for their alleged link to FETÖ. Today's action follows last week's dismissal of 820 army and navy personnel, with 648 of those remanded in custody.

In addition, the Cabinet discussed the ongoing Operation Euphrates Shield by Turkey in cooperation with the U.S.-led anti-DAESH coalition to clear its border with Syria from the terrorist groups DAESH and the PKK-affiliate Democratic Union Party (PYD).

"The operation's main aim is to secure our borders and block the attacks from Syria to our country," Canikli said and added that Turkey's aim to fight against terror is also for Syrian to be able to go back to their countries. He added: "Turkey is using its right based on the international law."

Canikli also touched upon the Operation Euphrates Shield launched by Turkey and anti-Daesh coalition to clear Turkey's borders from Daesh. "We encourage Syrians to return to their land after Jarablus liberated from Daesh" he said, adding that Turkey will supply water and electricity to Jarablus starting from Saturday and Monday.

"Operation Euphrates Shield has cleared a 772 square kilometers of area from Daesh, now controlled by the Free Syrian Army" Canikli said. he also commented on the anticipated joint operation on Syrian city of Raqqa, the bastion of Daesh terrorist group, saying that Turkey has a positive outlook on the matter.

The Cabinet addressed the latest developments from the operation and its counterterrorism operations against the PKK and its Syria-affiliate the PYD. After President Erdoğan's recent meetings with United Nations Secretary General Ban Ki-moon in China's coastal city of Hangzhou regarding Operation Euphrates Shield, the Cabinet in, chaired by Erdoğan, comprehensively addressed the discussions held at the G20 summit.

The Turkish Armed Forces (TSK) expanded Operation Euphrates Shield jointly with the Turkey-backed Free Syrian Army (FSA) to make advances in the region south of the al-Rai, also known as Çobanbey, after opposition fighters successfully secured Turkey's southern border with Syria by sweeping out DAESH terrorists late Sunday. The FSA is also expanding operations to al-Bab due to its geostrategic position between the cities of Manbij and Aleppo. President Erdoğan said during the press conference on Monday at the G20 summit that Turkey is in talks with Russia to find a solution in and around Aleppo in efforts to join forces to defeat DAESH in the al-Bab region. Chief of Staff Hulusi Akar attended the Cabinet meeting, disclosing the latest developments from the operation. Furthermore, with the ongoing clashes between the TSK and PKK terrorists in the southeastern Mardin, Van and Hakkari provinces, 23 soldiers and more than 100 terrorists were killed, according to the latest statement published by the Hakkari governorate.

Amid clashes with the PKK in eastern and southeastern provinces, the Cabinet addressed anti-terror operations against the PKK while the reconstruction and revitalization of the terror-torn provinces were discussed.

Another critical topic on the agenda of Wednesday's Cabinet meeting was the important meetings held at the G20 summit by President Erdoğan, providing information on the discussions and agreements made during the talks. As part of discussions at the recent G20 summit, Erdoğan met with German Chancellor Angela Merkel, French President Francois Hollande and Italian Prime Minister Matteo Renzi as well as meeting with Canadian Prime Minister Justin Trudeau on regional issues and bilateral ties between the two countries. Erdoğan also held bilateral meetings with U.S. President Barack Obama, Russian President Vladimir Putin regarding FETÖ, the Syria crisis. The president provided a briefing on all the discussions to Cabinet members on Wednesday.