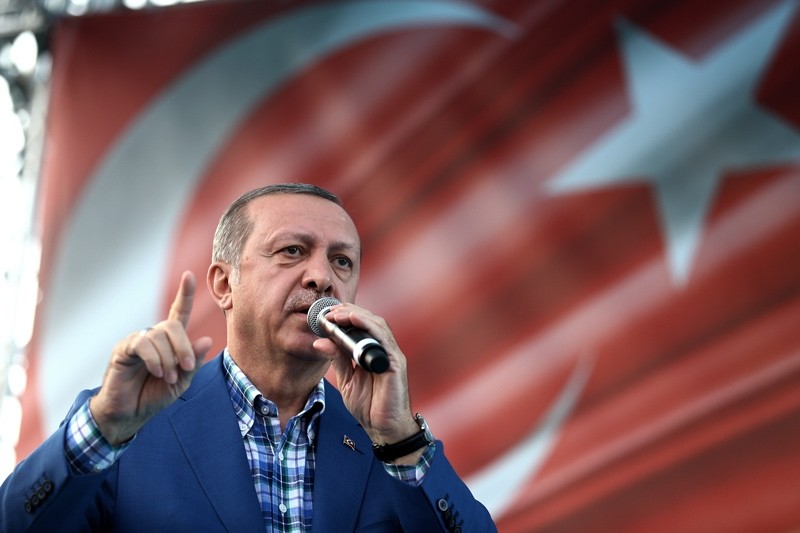 President Recep Tayyip Erdoğan sent a firm message against all terror groups threatening Turkey's national security in a statement released by the Presidency for the Qurban Bayram (Feast of the Sacrifice), also known as Eid al-Adha.

"We are determined to eradicate PKK terror from Turkey with the joint efforts of the security forces and hand in hand with the people. Just like [the Gülenist terror cult], FETÖ, the PKK also has no chance in standing against the nation's ability and the power of our state. The PKK's Syrian arm the Democratic Union Party and [its armed wing] People's Protection Units [PYD-YPG] also awaits the same fate," the president said in the statement released on Sunday, the eve of Qurban Bayram.

"We see that the PKK terror organization is in efforts to intensify its activities along the [southern] border regions," Erdoğan said and added that the terror group's aim is to disrupt Turkey's operation in Syria, backing the Free Syrian Army (FSA), to eliminate DAESH from its southern borders. He also said that the PKK has been experiencing some of the heaviest losses in its history.

Speaking on Ankara's fight against DAESH, President Erdoğan highlighted Ankara's determination to fight against the terror group and the efforts to eliminate this national security threat.

"It is a binding duty for us to eliminate the DAESH terror group from Syria, and make it unable to carry out attacks in Turkey. Operation Euphrates Shield is the first step. As a state and a nation, no one can stop us from doing what is necessary in eliminating terror groups, regardless of whoever is behind them," the president said.

In the message, the president also praised the people's power and resistance against the bloody coup attempt on July 15, which led by a faction of the military linked with the Gülenist terror cult, FETÖ.

"Terrorists in military uniforms turned the tanks, planes, helicopters owned by the people against the people. Our country was subjected to a coup attempt, a huge terror attack, and also a secret invasion attempt on that night [July 15]," Erdoğan stated. The president added that through the heroic acts of the people, the coup attempt was thwarted.

On July 15, a group of rogue soldiers associated with FETÖ, led by Fethullah Gülen, attempted to overthrow the government in Turkey through a military takeover, killing over 240 people and injuring over 2,000.

Highlighting the united stand taken by people from different political backgrounds against the coup, Erdoğan underscored that Turkey now stands stronger than before the coup attempt on the road to reach its goals set for the years 2023 and 2071.

Erdoğan also celebrated the Muslim world's Qurban Bayram, wishing that the bayram will bring peace and blessings to the global Muslim community and humanity.

Meanwhile, Prime Minister Binali Yıldırım also issued a message, celebrating the Qurban Bayram and assured that the government is striving with all its power to provide peace in the region and in the world. He said that the battle will continue until the violence of terror groups is completely eliminated in Turkey and its region.