After DAESH clearance from Jarablus, 1,700 Syrians return to their homes 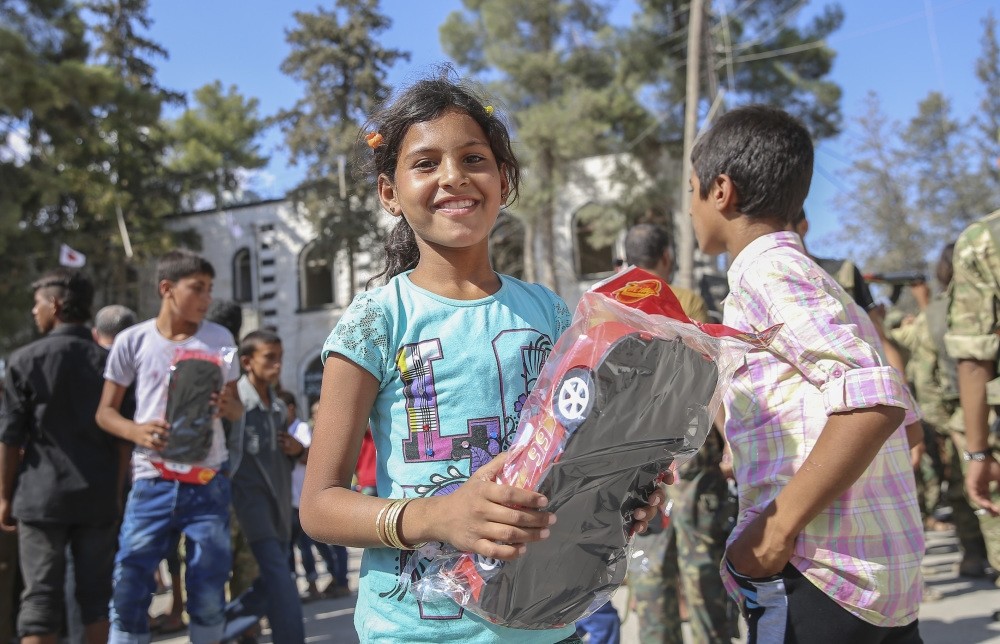 Toys were distributed to children in Jarablus. After the border town was cleared of DAESH after Turkey's Operation Euphrates Shield, people celebrated Qurban Bayram in their hometown after nearly three years away.
by Merve Aydoğan Sep 15, 2016 12:00 am

At least 1,700 Syrians have already returned to their homes in Jarablus after the Syrian town was cleared of DAESH terrorists by theAnkara- backed Free Syrian Army in Operation Euphrates Shield

Upon havIng been liberated from DAESH, the north Syrian town of Jarablus has welcomed its residents back home throughout Qurban Bayram thanks to Operation Euphrates Shield, launched by Turkey in cooperation with the Free Syrian Army (FSA). As the operation enters its 22nd day, 1,700 Syrians have already returned to their homes, according to information from the Gaziantep Migration Directorate. During Qurban Bayram, children of Jarablus were among those who enjoyed most being back at home by playing on the park set up specifically for them by the Gaziantep Municipality.

Residents of the north Syrian town of Jarablus who sought refuge in Turkey are returning to their homes throughout Qurban Bayram (Feast of the Sacrifice), also known as Eid al-Adha, as Operation Euphrates Shield liberated the town of DAESH and aims to eradicate other terror groups from the area. As the operation enters its 22nd day, 1,700 Syrians have already returned to their homes, according to information from the Gaziantep Migration Directorate.

Commenting on the return of Syrians to Jarablus, Justice and Development Party (AK Party) Deputy Chairman Mehmet Muş stated recently that the refugee returns are expected to gain momentum. Since Sept. 7, Syrian residents of the town of Jarablus in Turkey have been making their way to the border town of Karkamış in Gaziantep province to return to their homes. The governorate allowed them to pass through the Karkamış border gate to reunite with their families in Syria for Qurban Bayram.

As the Syrians undergo security checks prior to returning to Jarablus, the head of the Gaziantep Migration Directorate Oktay Bahçeci told Anadolu Agency (AA) that the return of these refugees is ongoing: "As of today, 1,700 Syrians have returned to their homes. Identity cards for Syrians who do not have proper identification are being processed prior to their return. The returns are to continue on request."

Adding to Bahçeci's remarks, AK Party's Muş underlined that the PKK's wishes to establish a corridor for itself have failed, and said: "Turkey aims to eliminate the threat caused by terrorist organizations by moving toward the south. The PKK is the same as the PKK's Syrian franchise Democratic Union Party (PYD) as the top figures [from both groups] are the same. The PYD's armed wing People's Protection Units (YPG) and DAESH are the same. … the U.S. must accept this as it is necessary to maintain our strategic partnership."

While those returning to Syria include mainly women and children, local nongovernmental organizations in Gaziantep are providing food and humanitarian aid to all those in need in Jarablus, al-Rai and Havar.

In addition to the excitement of being able to safely return to their homes, refugees in these provinces have begun to receive electricity as Turkey started running electricity lines and water supply to Jarablus.

"We will provide electricity to Jarablus this bayram," Turkey's Energy and Natural Resources Minister Berat Albayrak tweeted last week as the electricity had reached Jarablus the previous Saturday.

Turkey launched Operation Euphrates Shield in cooperation with the Free Syrian Army (FSA) on Aug. 24 to clear its southern border of DAESH terrorists and liberate northern Syrian towns from the terrorist group. In less than a day, the FSA, backed by the Turkish Armed Forces (TSK) liberated Jarablus and continued marching from the east and the west.

On Sept. 4, the FSA secured Turkey's entire border with northern Syria from DAESH. Since then, the opposition army has been advancing toward the south. According to the FSA, the operation will continue with the aim of capturing the strategic town of al-Bab in the south.
Last Update: Sep 15, 2016 1:33 am
RELATED TOPICS